During our holiday at the Lake Wolfgang we stayed in a small b&b directly on the route of the „Schafbergbahn“. Of course, we had to take the cogwheel railway. 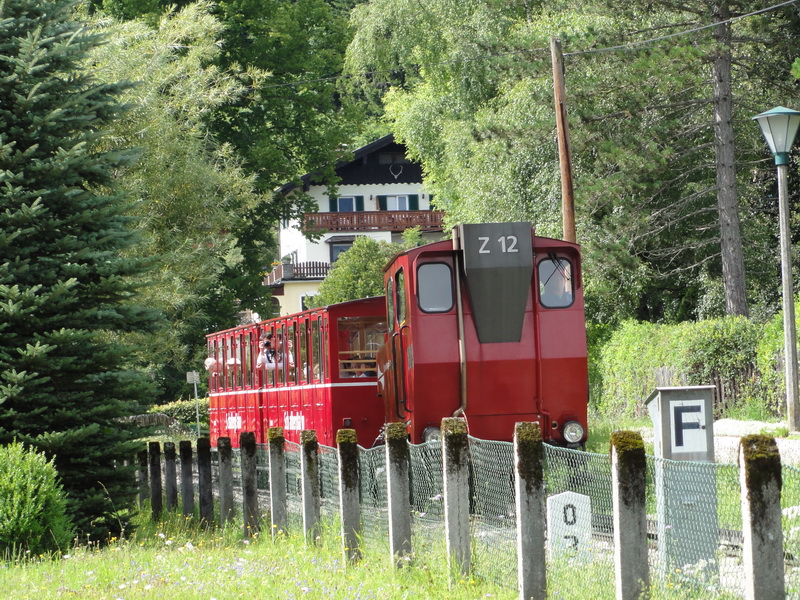 In 1890 concessions were granted for the construction of a few mountain railways in Austria. The building of a cogwheel railway on the mountain Schafberg was approved by the city St.Wolfgang on Lake Wolfgang. In April 1892 construction began. Material and food for the well over 350 workers was transported to the site with mules.
The first locomotive was transported with a sledge in individual parts and was then assembled by experts on site. After a test ride, the first train reached the peak of the mountain, the Schafbergspitze, at the end of July 1893 and the route was officially inaugurated the next day. The Schafbergbahn is the steepest cogwheel railway in Austria.
After some changes of ownership, the mountain railway has been operated by Salzkammergutbahn GmbH (SKGB) since 2006. 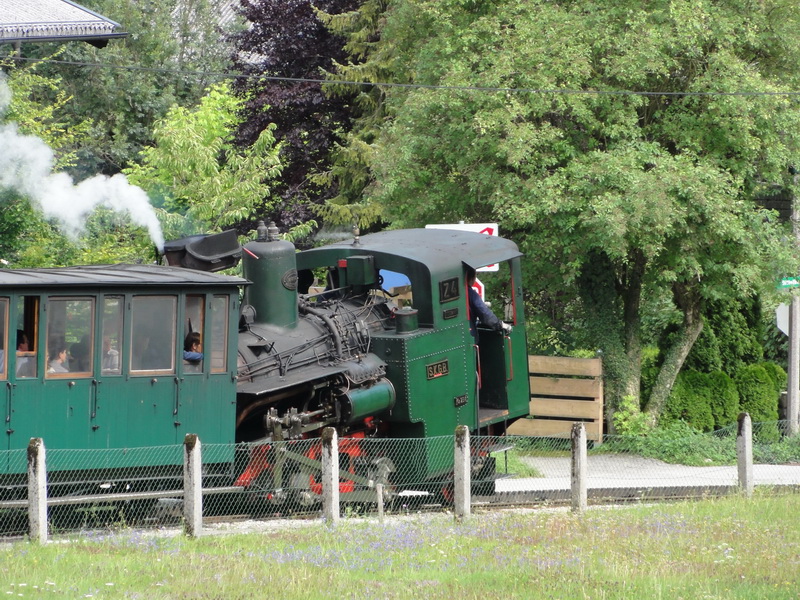 It all starts in St.Wolfgang. About every 35 minutes a train departs to the Schafbergspitze. There are only as many tickets sold as there are seats available on the train. 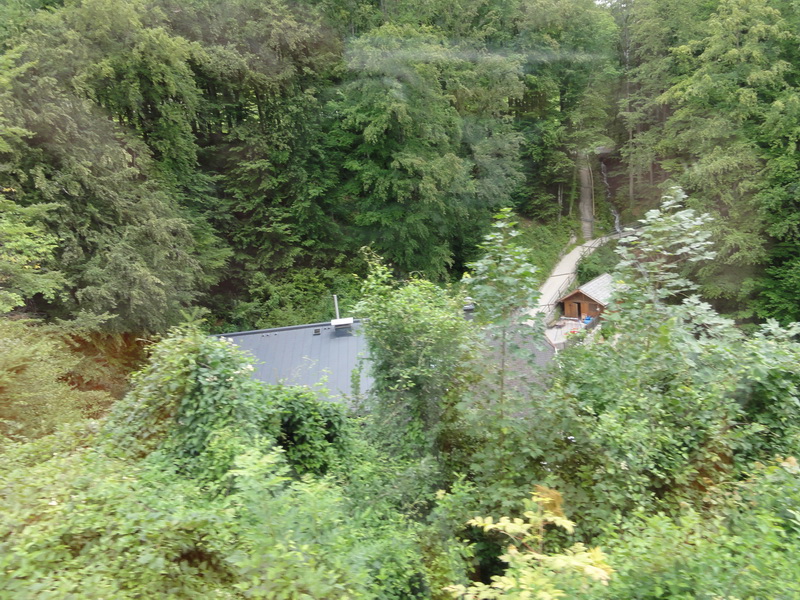 The train takes 30 minutes to its first stop at an alp, the Schafbergalm.
Past meadows and forests, the railways continues to the next alp, Dorneralm. At this stop the nostalgic trains have to refill their water tanks. When the train reaches the Schafbergalm, it has gone a distance of 4.2 km and climbed 1363 m. If you want to, you can get off at the station, which has been refurbished according to a historical model, and after an hour’s hike you reach the Schafbergspitze. Or you stay on the train for another ten minutes 10 minutes to climb all the way up to 1732 meters. All on rails that were built very close to the mountain side.

We arrived very early at the station of the Schafbergbahn. We were aiming for the first train to go up this day. Despite it being only August, the weather in the valley was already chilly and foggy, our expectations for the peak of the mountain were more of the same. 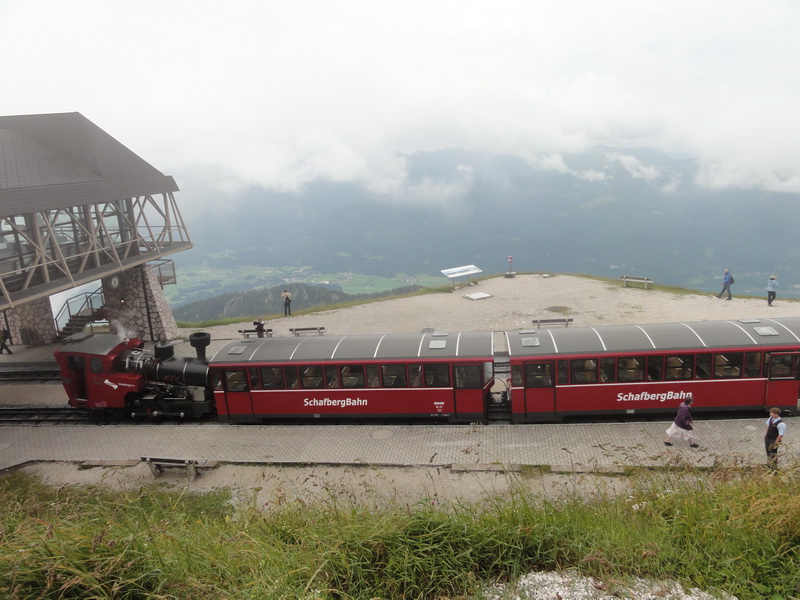 The waggons are very simple and equipped with wooden benches. Standing up during the ascend is prohibited, too steep is the way the train takes up the slope. That said, once sat in the coaches, everything feels straight and upright. We drove through the fog and low hanging clouds higher and higher up the mountain. If we would have been able to see, we would have gotten a sneak peak of the great view to come on top of the mountain.

At the top, we were standing in low-hanging clouds. Well out of sight due to fog was the valley below us. We wandered off to explore the area. I found a landmark called Himmelspforte, but I did not go through it.

Train to the top of the mountain

Over the course of the morning hours, the clouds thinned more and more. And before we knew it they revealed the valley below. What a view of the Lake Wolfgang! 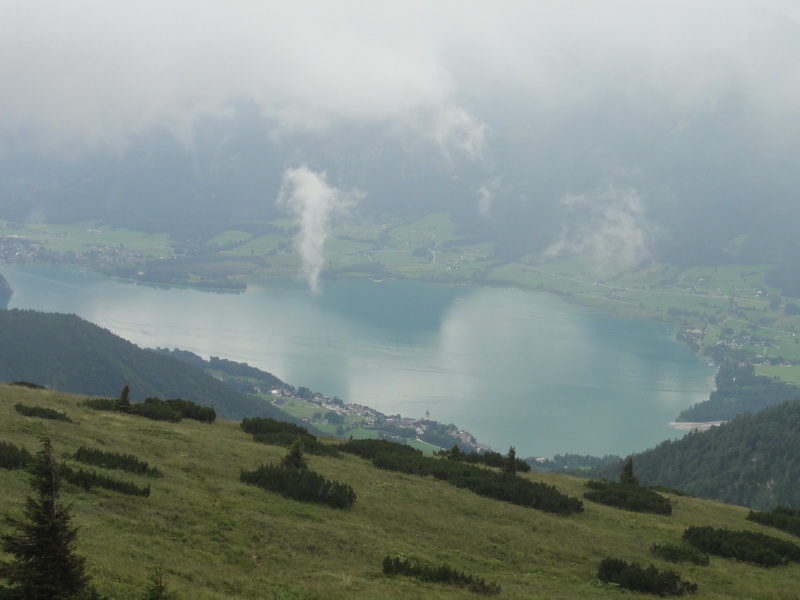 A great trip which we both liked very much.

Adults (return):
to Schafbergalm: € 29.00
to Schafbergspitze: € 36,00
Discounts are offered. There is also the possibility to book a single trip.

The first ride starts at 9:20 am,
the last descent from the Schafbergspitze is at 17:05.

Attention!
For the descent, seat tickets are issued at the mountain station. Standing while driving is not possible.