Carcassonne
Carcassonne is more than a board game

The train takes a little over an hour from Toulouse to Carcassonne. We are huge fans of the board game of the same name and so we simply had to go. We set off on our excursion on a Saturday morning.

We were sold our tickets by a very friendly member of staff at the Toulouse train station. He used a mix of English and French as well as his hands and feet to communicate. 66€ for a return ticket for two. However, there is a weekend ticket (valid for one year in the whole of France) for 20€ and with that, we saved 50% of the ticket price. We quickly crunched the numbers and found that this would indeed work out cheaper for us. We were mildly annoyed because we could have used that ticket for our trip from Paris to Giverny. Anyway, at least now we can plan to use it for another journey to France.
I used the duration of our train ride to do some research on Carcassonne. 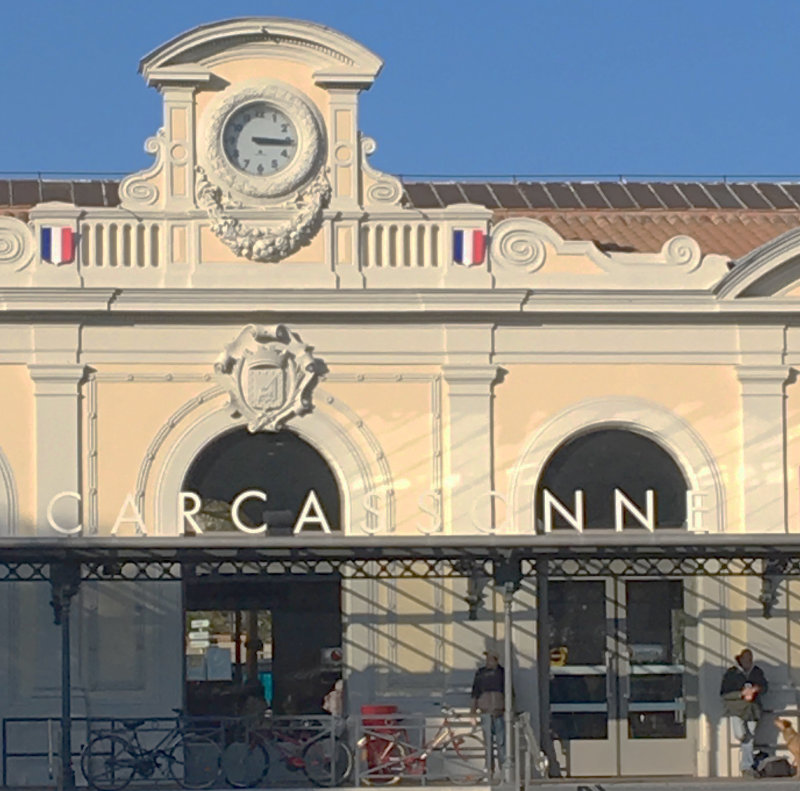 The legend around the name

How did Carcassone get its name?
There is a legend around the name of Carcassonne. It says that the city’s fortress was once besieged and that after some time hunger claimed the first lives in the Cité.
Lady of the castle Madame Carcas decided to fatten a pig, despite the limited resources. After she deemed it fat enough, the pig was driven out of the castle.
The besiegers, starved and exhausted themselves, were shocked by the sight of the fat pig. They concluded that the people within the fortress walls must be doing so well that they are even able to share food with their besiegers. Supposedly defeated, they retreated.
To express the joy about the end of the besiegement Madame Carcas rang the bells of the city. A besieger commented that with the words “Madame Carcas sonne” (Madame Carcas is ringing the bells).

A true story? Who knows? 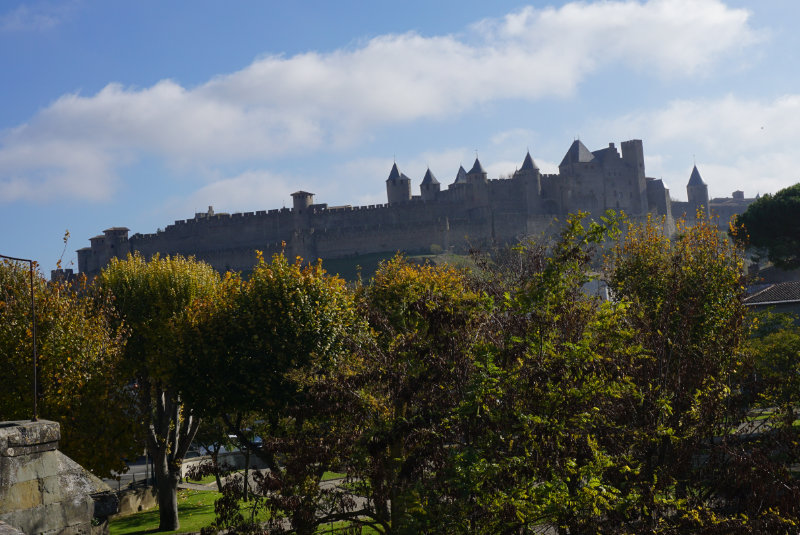 Carcassonne is in South France in the Occitania region. The most popular landmark of the town is the Cité of Carcassonne, a medieval fortress on a hill.

There were settlements in the area around Carcassonne in the Ancient Times. Romans built the first buildings in the location the Cité is situated in now. This enabled them to gain control over the trade routes from the Mediterranean Sea and the Atlantic. They created a horseshoe-shaped wall flanked by towers that remained the inner fortress wall until today. The ring had four gates, 30 towers and windows that were big enough to throw spears through them.

Political power in the region shifted many times over the years and the respective rulers had certain changes worked into the structure of the fortress. When Roussillion became part of the French empire in 1659 Carcassonne was no longer a border fortress and lost its importance.

The architect Eugène Viollet-le-Duc restored the fortress in the 19th century. It became a UNESCO World Heritage Site in 1997.

Arrival at the city

During the main season, there is a paid shuttle from the train station in Carcassonne to the fortress. Alternatively, a 30-minute walk through the old town takes visitors to the Cité while also giving them a first impression of the city. Just keep following the signs to the Cité! 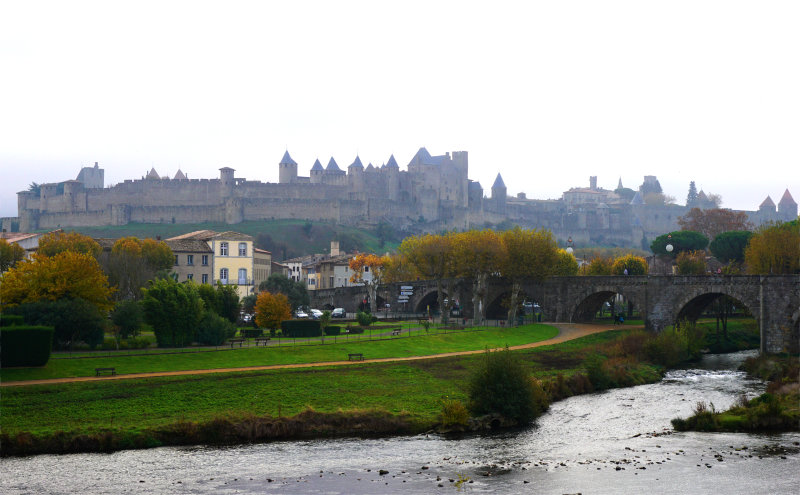 Admittedly, we strayed from the path and didn’t take the signposted way across the Aude via the old bridge Ponte Vieux. We used the new car bridge instead so that we got to enjoy the view of the old bridge and the fortress.
We continued uphill to the Gate of Narbonne and its drawbridge. It is the eastern gate of the fortress and it was built in 1280. It is framed by two towers and marks the main entrance to the fortress. 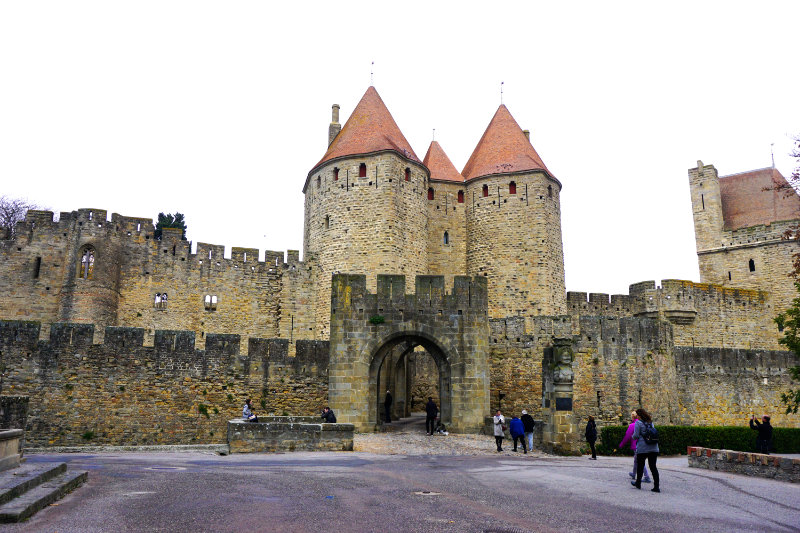 Admission to the fortress is free. However, tickets to Comtal Castle or to the different museums are not. If you are planning to visit more than one of them it might be beneficial to invest in a City Pass that also gives you access to a guided tour. We did not use the City Pass as we only wanted to visit the castle. 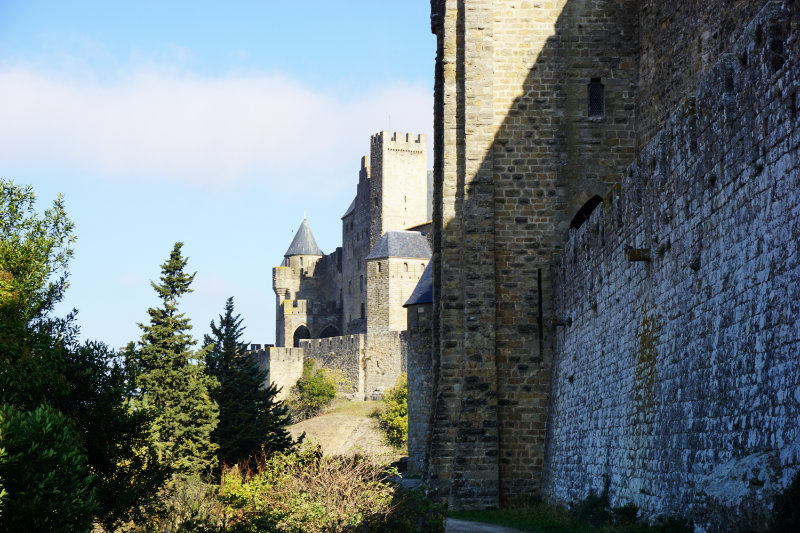 Strolling through the medieval fortress city

We turned into the area between the two fortress walls right behind the Gate of Narbonne. The idea was to walk around the whole fortress but to be honest, we didn’t get any further than the lower tilt yards because it was so windy and cold. We found a little passage into the fortress city there. After the sun had come out at around midday we continued around the fortress and walked past the Aude Gate, the upper tilt yards and then all the way back to the Gare of Narbonne. 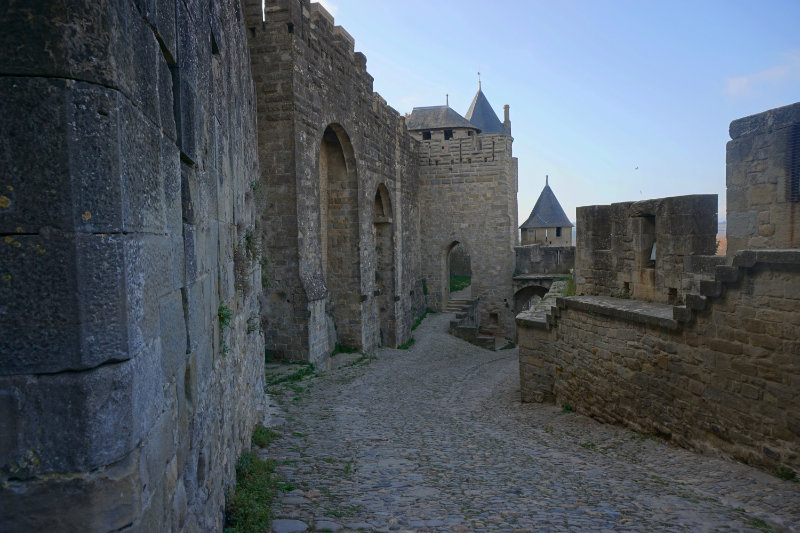 In search of an open restaurant – we were in desperate need of a hot beverage to warm up – we wandered along the small alleys of the fortress city. This is how we found the big and the small well. These wells date back to the 14th century and were used to supply the fortress with fresh water. Legend has it that there is a treasure hidden in the wells somewhere. But to this day, no one has ever found it. 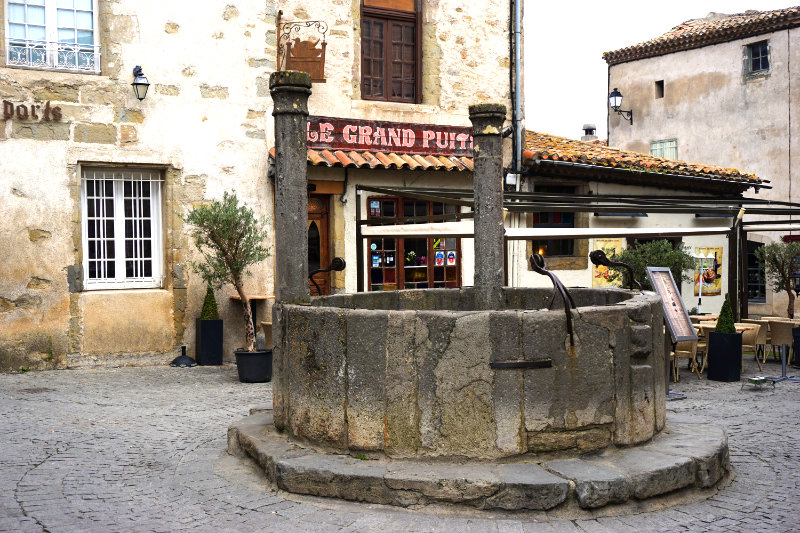 After the tea had us all warmed up again, we went back to exploring the fortress. Restauration works were underway in the Saint-Nazaire Basilica at the time of our visit. But we got to marvel at the exterior of the building that was erected between the 11th and 14th century. The building is characterised by different architectural styles. It has a Romanesque portal, a Gothic nave and Gothic windows.

An outdoor theatre that was built in 1908 is right next to the Cité. It was placed on the former monastery grounds and is now an outdoor event venue in the summer months. 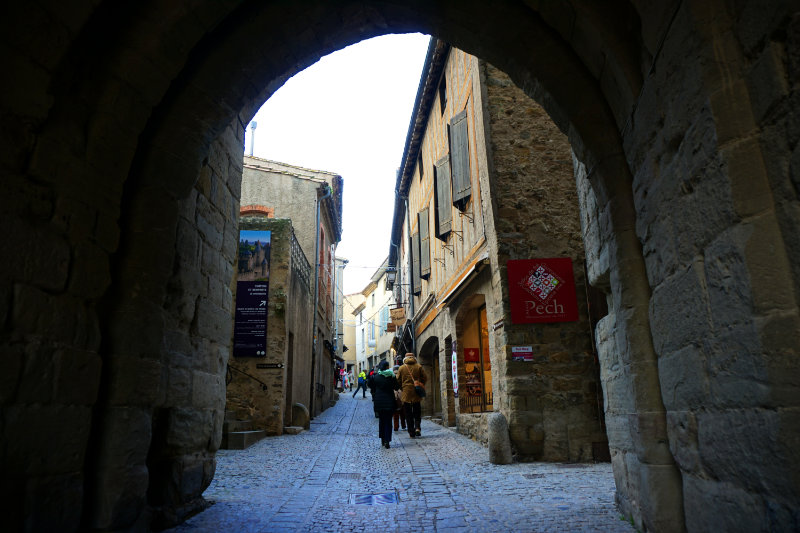 The small alleys of the city are really stunning. We came in November, which seems to be the off-season. Only very few visitors were around and many restaurants and shops were closed. Un the plus side it was nice and quiet.

Comtal Castle in the Cité of Carcassonne

The highlight of a visit to the Cité certainly is Comtal Castle. A ticket costs 9€ per adult and in my opinion, the visit is well worth the price. 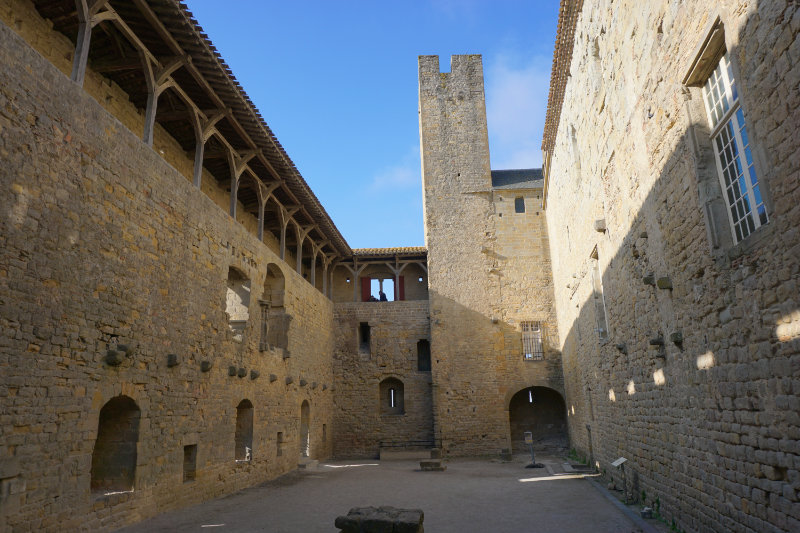 The castle was built by the Viscontes of Carcassonne in the 12th century. It was altered multiple times over the years. On the tour through the insides of the building, visitors get to see a short video about the construction of the castle (French with English subtitles). In addition to the many rooms that can be viewed, visitors can also go for a short walk on the castle walls. The view of the city from up here is lovely and one can also look down into the fortress of Carcassonne. 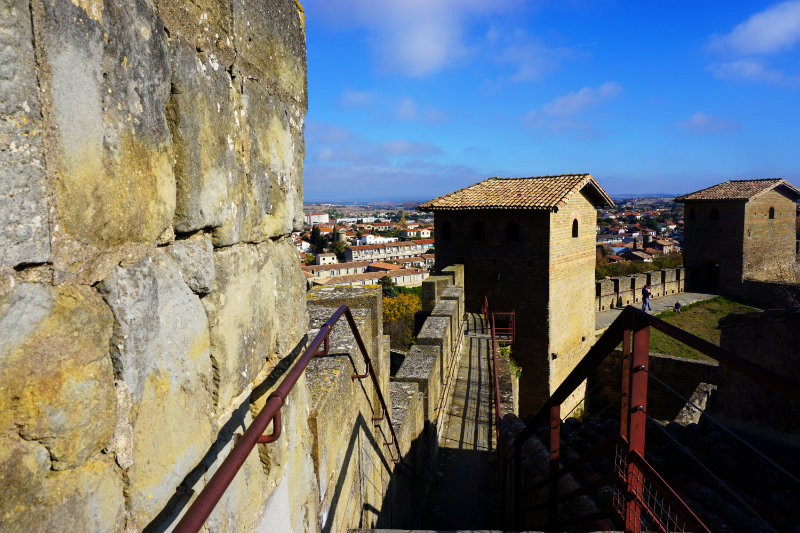 We left the Cité after about 4 hours (without having visited any of the museums). One can surely spend a lot more time here and also get deeper into the history of the complex in the museums. But we preferred to spend some of this time in the area around the Bastide Saint-Louis. 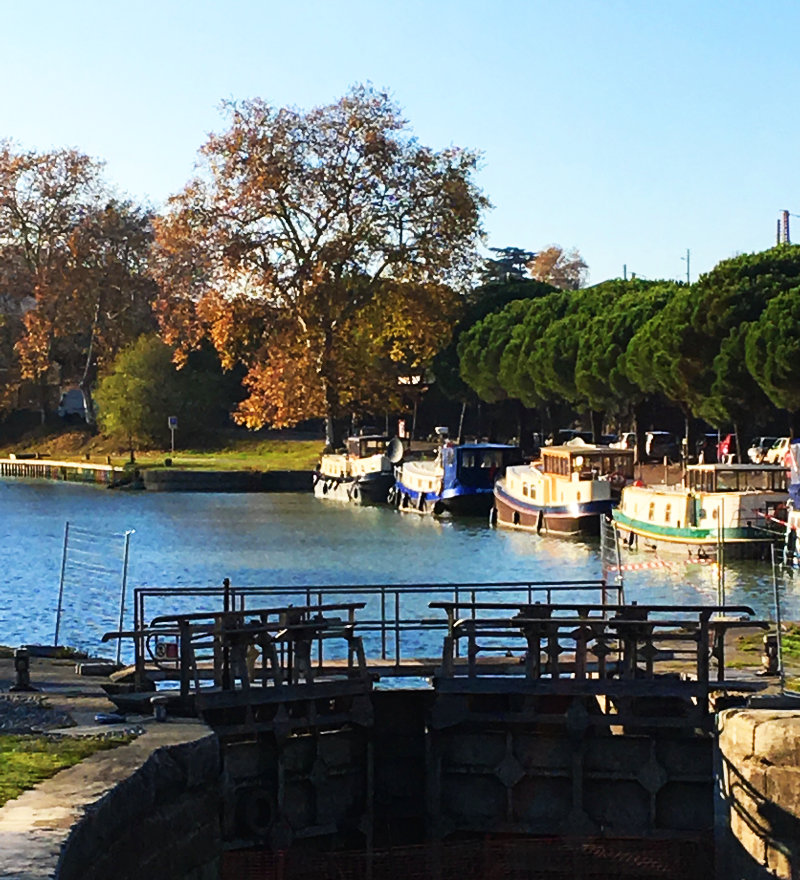 The Bastide Saint-Louis is on the opposite side of the Aude. Visitors can get to the inner city of Carcassonne quickly via the old bridge Pont Vieux. The roads in this area are arranged like on a chess board. We entered the city through the Jacobin Portal from the 18th century and walked past churches and beautiful old buildings to the Neptune Fountain in the heart of the old town. The fountain was built in 1771 by an Italian architect. It is made of marble. From here, one gets into the inviting highstreets for a little shopping tour (bear in mind that many shops close for a lunch break!).
We had a quick look at the UNESCO World Heritage Site Canal du Midi before we took the train back to Toulouse in the late afternoon.
I was amazed by Carcassonne’s medieval fortress and immediately pulled out the old board game when we came back to Berlin. The theme for the next board game night is decided!