Toulouse
Our top 2 for a city tour

Do you know Toulouse? We were a little unprepared when we arrived but explored some really lovely places on our discovery tour through the city. I’d like to introduce our two favourite ones.

The Jacobin Monastery of the Dominican Order of Toulouse was built in 1229. The monastery church is dedicated to St. Thomas Aquinas. His remains are still kept in a shrine beneath a panel of the altar.

The Dominican Order of the region pursued the goal of converting people and turn them away from heresy. Toulouse was a major centre for activities like that. The Order purchased a plot of land in the inner city and built a church. The Order was broken up during the French Revolution and its possessions were signed over to the state. In the years that followed the monastery was used as a storage facility and as barracks, the church was turned into stables and a veterinarian facility was established in the Antonius Chapel. The structure of the building itself, however, remained mostly unchanged and so elaborate restoration works were possible in the 19th century.

A visit to the church

A side entrance leads into the monastery church. This area is open to the public. 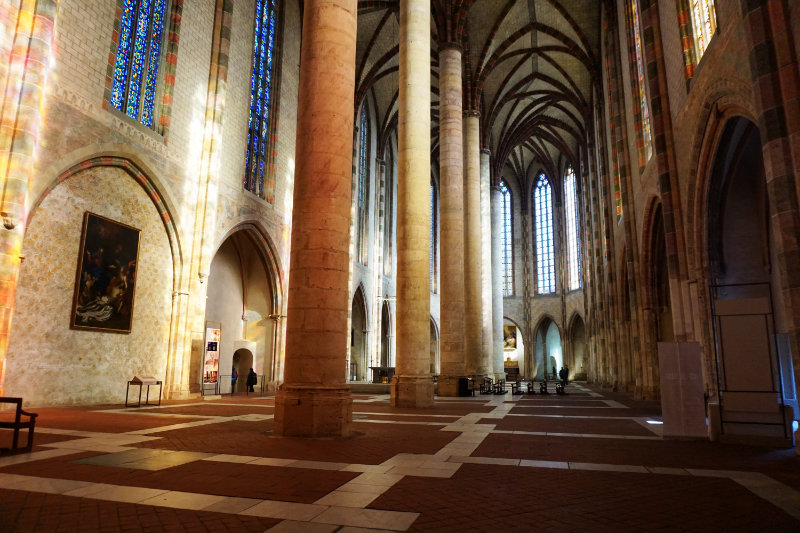 We walk into the brick building and find ourselves in a big, empty room. Almost no church benches, only the altar with the remains of St. Thomas Aquinas. The room is characterised by tall columns and colourful windows. The sun shines through the windows and generates colourful shadows on the columns that are 22 meters tall. The church is 80 meters long and one can see from one end to another without statues or pulpits blocking the view. Above the apse is a star-shaped dome with 11 arms. It is said that this dome is one of the biggest and most ambitious constructions of the middle ages. I liked the harmonious colour scheme.
It is a monumental feeling to stand in such a big and empty space.
A small door leads to the ticket desks where we purchase our ticket for the monastery for 4€ per person.

First, we arrive at the cloister of the Jacobin monastery. It is formed of four wings and was built between 1306 and 1309. We slowly walk around it and enjoy the wonderful silence. The few visitors in the cloister are only whispering, we hear the sound of a camera shutter every once in a while. It almost seems as if the outside world can’t come into the monastery. 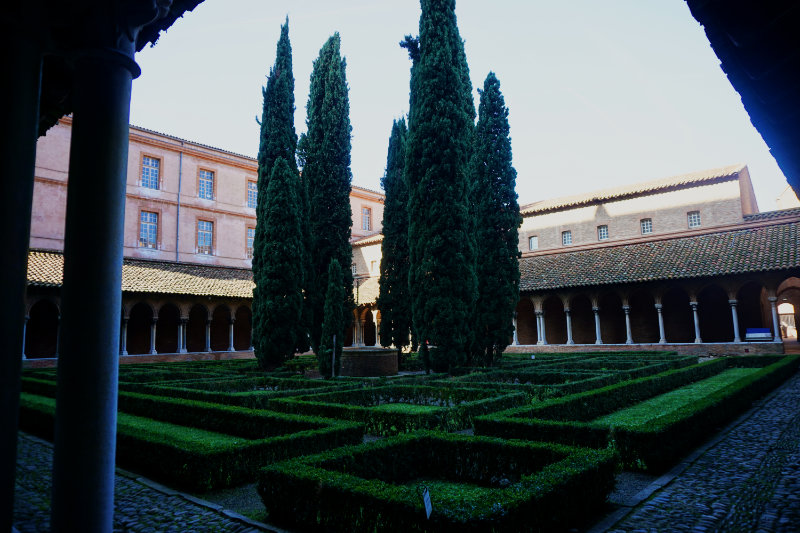 There is one particular spot with a very nice view of the bell tower of the Jacobin monastery. It is almost 45 meters high and is located on the north side of the church. It has a very striking octagonal footprint and multiple storeys. 8 double arcades with gable arches mark each storey. A moulding tops every storey. I like the bell tower. It doesn’t look as edgy and massive as many other church towers do. 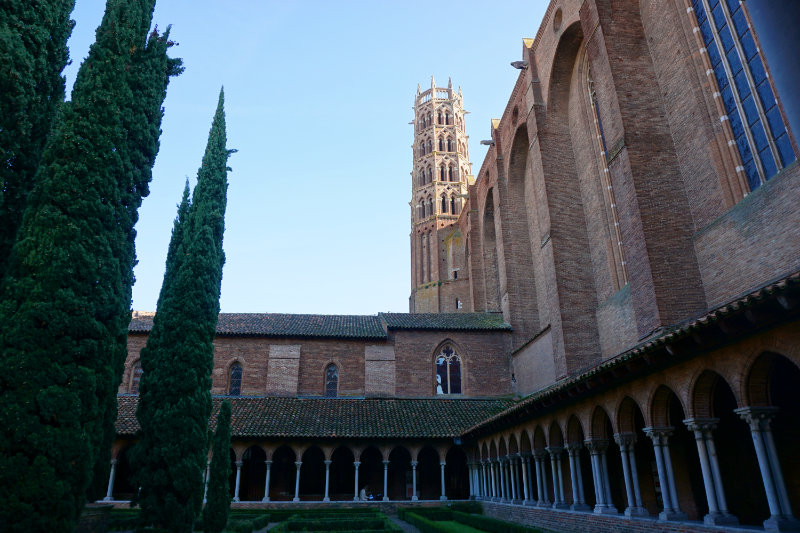 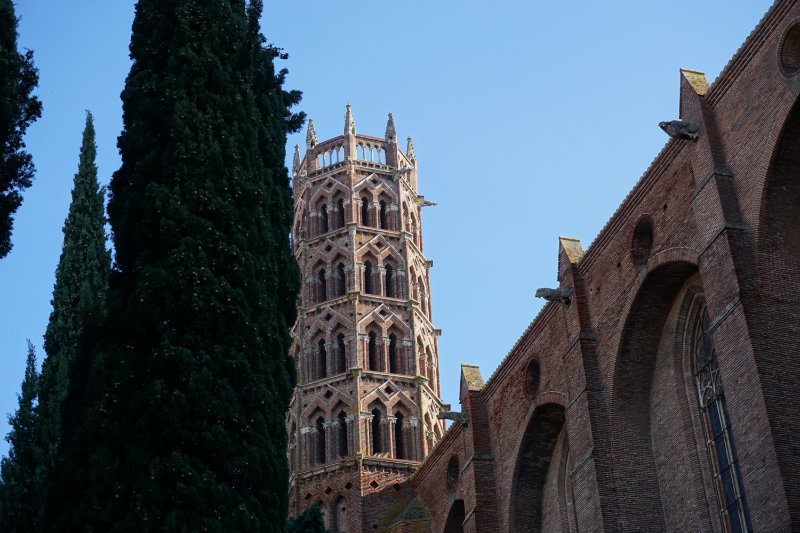 Next, we enter the refectory. A rather bizarre exhibition was taking place at the time of our visit. The rooms were pitch black. We were handed headlamps and to the sound of French tape recordings, we walked past open coffins. In the coffins, we saw pictures of people, alive and dead, in the spotlight, very pale. I felt like in a horror show. We, unfortunately, didn’t see much of the room but it felt huge (we later read that is measures 20 meters in length and 17 meters in height). All I could think of was to get out of this art installation that made me feel deeply uncomfortable. Through another door we fled the exhibition into the St. Antonius Chapel. The chapel with its wonderful vaults and frescos was erected between 1335 and 1341. Light was only let in through the three windows and therefore the room was relatively dark. 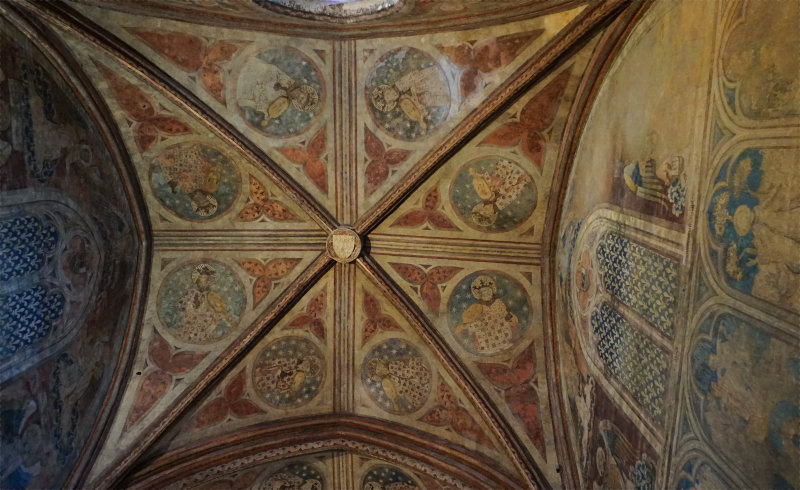 In the East Wing of the cloister is the Chapter House. It was built between 1299 and 1301. Visitors enter the room through a massive portal.

Behind the portal lies a room filled with columns and half columns, plastered walls and vaults where grout joints were painted on the plaster to create the illusion of tiles. Light floods into the room through the big windows that are facing the cloister.

I enjoyed our visit to the Jacobin Monastery in Toulouse. A Peaceful and quiet place to rest for a while and enjoy the silence. 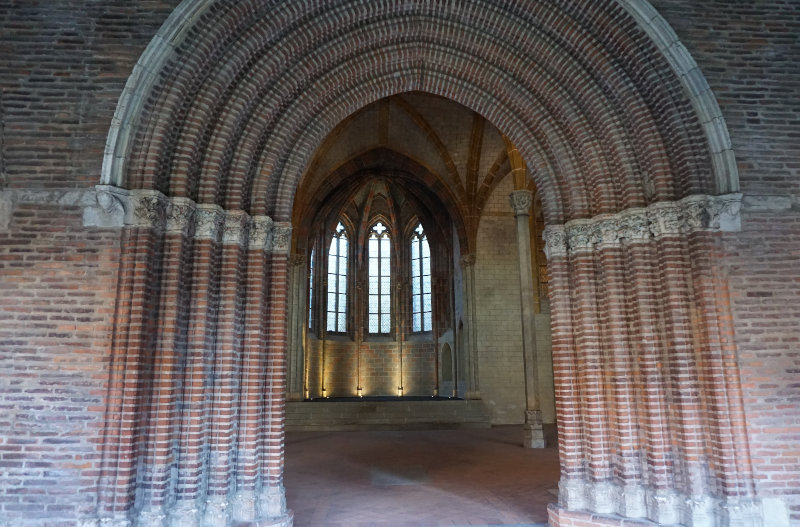 Top 2: A walk along the Garonne

The Garonne river runs through the south west of France. The river is almost 650 kilometres long and begins in Val d’Aran (Pyrenees). 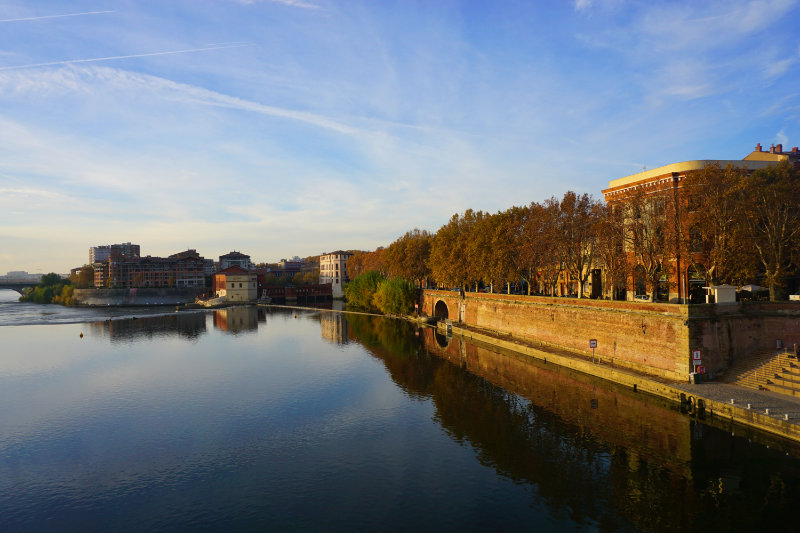 On its way it to the Atlantic, the river also comes through Toulouse. Ships can move along the river to and from Bordeaux. Past Bordeaux the bridges are no longer tall enough for bigger ships and depending on the water levels the river is only usable for smaller vessels. Shipping heavily depends on the water levels of the Garonne the further up the river they go. There is a canal that runs parallel to the river all the way until Toulouse. That is why it doesn’t come as a surprise that one doesn’t see any ships on the Garonne in Toulouse and all there is to get excited about is a lonely paddling boat every now and again. 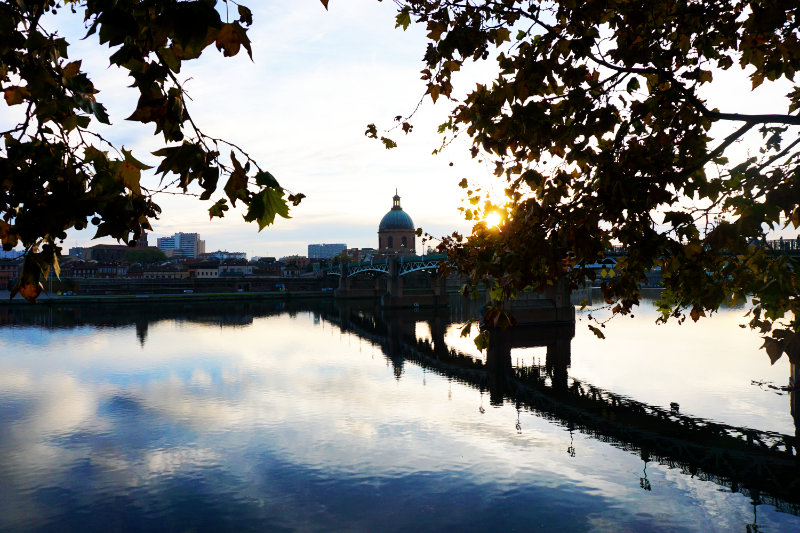 We went to Toulouse in early November and were lucky with the weather. We got to enjoy the last sunny days of autumn for that year. Under a wonderfully blue sky and with a temperature of 13 degrees on that day, the paths along the Garonne looked all too inviting for a walk. There are some bridges that cross the Garonne. The most well-known of them is Pont Neuf.

The oldest bridge in Toulouse is Pont Neuf. The bridge is about 220 meters long and consists of seven irregular arches. 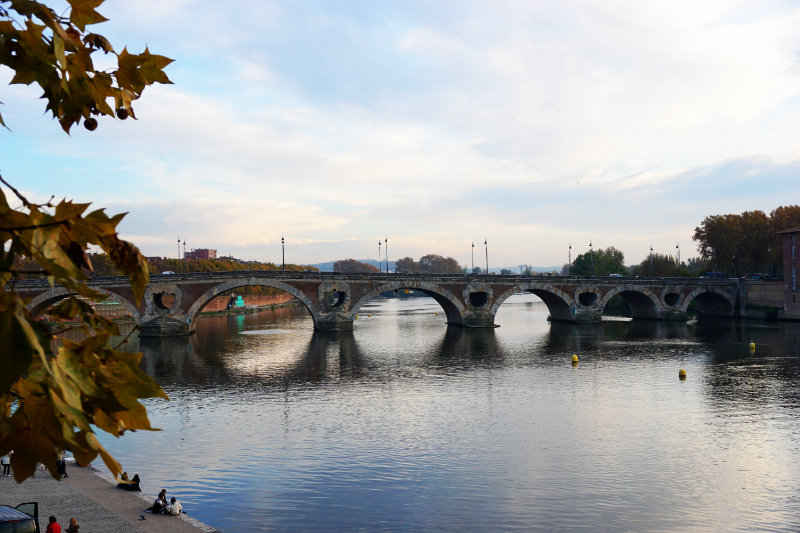 The biggest arch measures around 30 meters across and is closer to the eastern banks of the river. Light limestone and red bricks were used to build the bridge. Gaps in between the arches, the so-called pendentives, we built in to improve the flow rate through the bridge and with that reduce pressure on the structure during times with high water levels. This is how the bridge survived even the big flood of June 1875 where the water stood as high as the upper tip of the arches. 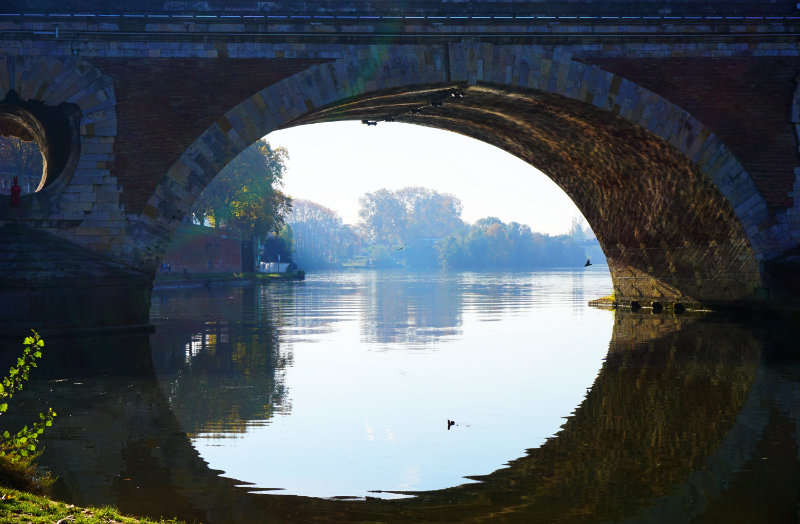 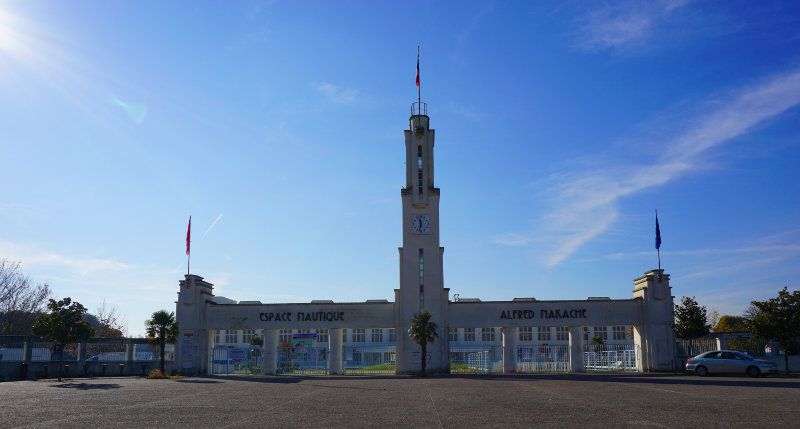 Most tourists turn around at this point but we continued a little further. Our goal was to reach Île du Ramier, a little island that we were able to see in the distance.
The Toulouse Congress Centre, Parc des Expositions, is on the Île du Ramier as well as the Stadium Municipal which is home to the Toulouse Football Club. On top of that, we also spotted some smaller rowing and waterski clubs.
On a big car park, we saw an interesting looking entrance that we wanted to have a closer look at.
It turned out to be the entrance to the summer outdoor pool Nakache. There is an indoor pool, too, that visitors get to through a different door.