We are in Nürnberg at the Kaiserburg (Emperor’s Castle). One can’t miss it as part of the view of the city from up here, the former Nazi party rally grounds. An area so rich in German history that should not ever be forgotten. 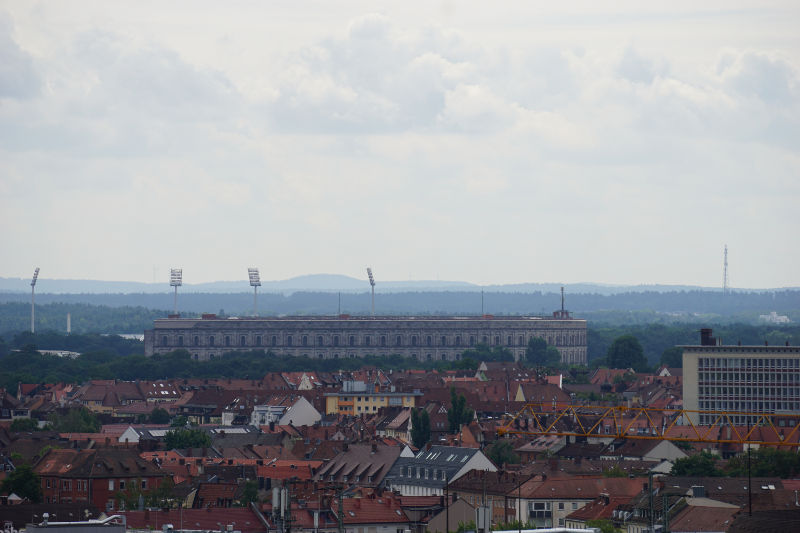 Huge and obvious within the city skyline is the monumental building from the past. One can guess the vast dimensions of it from afar.
We visited this historic place and explored the Nazi party rally grounds on foot. We downloaded a map of the premisses from their website in advance so that we wouldn’t miss the interesting stops on our visit. Once we were there we realised that the very well thought through information panels not only provide information for the different stops on the way but also give a good overview of what is there and also included a map of the premises.
We started at the Documentation Centre and walked along the Dutzendteich to the courtyard of the Congress Hall.

One enters the Congress Hall Courtyard through a relatively plain entrance. Then, one finds oneself in an enormous yard that is about 200 meters long and 240 meters across at its widest point. The dimensions are imposing and make the visitor feel small and insignificant, especially when almost alone in the courtyard.

The Congress Hall was planned as a monumental building with the capacity for 50.000 people during NSDAP gatherings. The building would have had almost twice the size of the Colosseum in Rome. The special feature would have been the 70 meters high, unsupported roof above the main building. A 39 meters high, u-shaped shell construction was built until 1939. The main part of the shell is made of bricks, the facade is covered in granite slabs. Construction was put on hold during the war.

The question was what to do with the ruins after the war. Many ideas were discussed and ultimately scrapped again.
The building is now used to house part of the Documentation Centre, also by the Nürnberg Symphony Orchestra and for storage. Occasionally concerts take place in the courtyard.

Architect Albert Speer planned the Große Straße (the big street) as the central axis. It was designed to be 60 meters across and 2 kilometres long (only 1.5 kilometres were actually built). It was supposed to serve as the optical connection between the mediaeval Kaiserburg (Emperor‘s Castle) and the modern party rally grounds. Construction workers laid down about 60.000 granite slabs in two different colours for the road surface. This was supposed to help soldiers keep the correct orientation when marching down the street. One slab was also approximately as long as two Prussian goose steps. 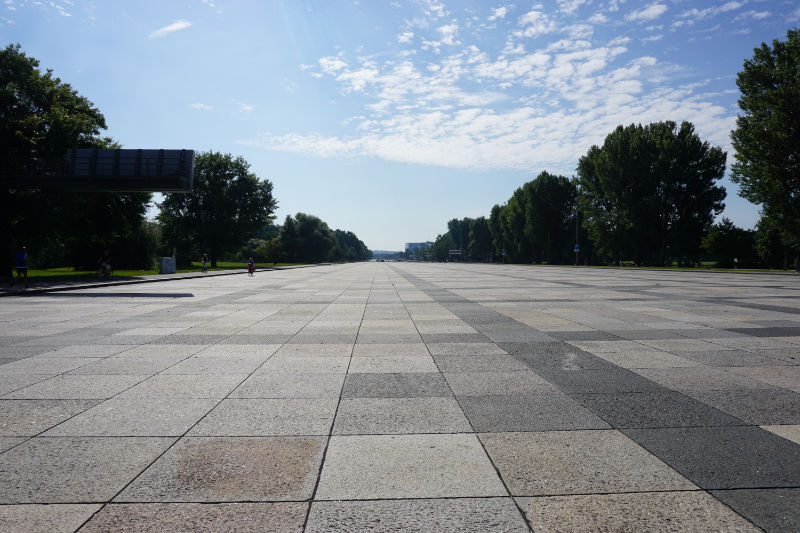 The majority of the road was finished by 1939 but since there were no more party rallies the Big Street was never used to parade.
The US army used the street as a makeshift airport after the war. Since 1968 it is used as a car park for events. The Große Straße was restored between 1991 and 1995 following guidelines of monument protection. The granite slabs were touched up but, unfortunately, about a third of the complex was covered in concrete.
The road somewhat reminded me of the square in front of the Olympic Stadium in Berlin. The slabs were laid out in a similar design, but the square is a lot shorter. The dimensions of the Big Street in Nürnberg are impressive. Especially when stood in front of the big empty space.

We arrived at the info panel for the Foundation Stone Deutsches Stadion (German Stadium). So where is it, this foundation stone?
Right next to the panel is one single granite stone covered in wooden planks – the foundation stone? It wasn’t marked as such but it was the only stone around…
The info panel said that the German Stadium was designed to be the biggest arena in the world. It was supposed to have space for 400.000 (four hundred thousand) spectators. The stadium was also designed by Albert Speer. He had modelled the designs after the Greek Panathinaiko Stadium and its horseshoe shape. His design scaled the stadium up to be absolutely gigantic.
The foundation stone was laid on the 09.09.1937 but more than a building pit was never achieved. When the works stopped during the Second World War the pit slowly filled up with water and the Silbersee (Silver Lake) was born. 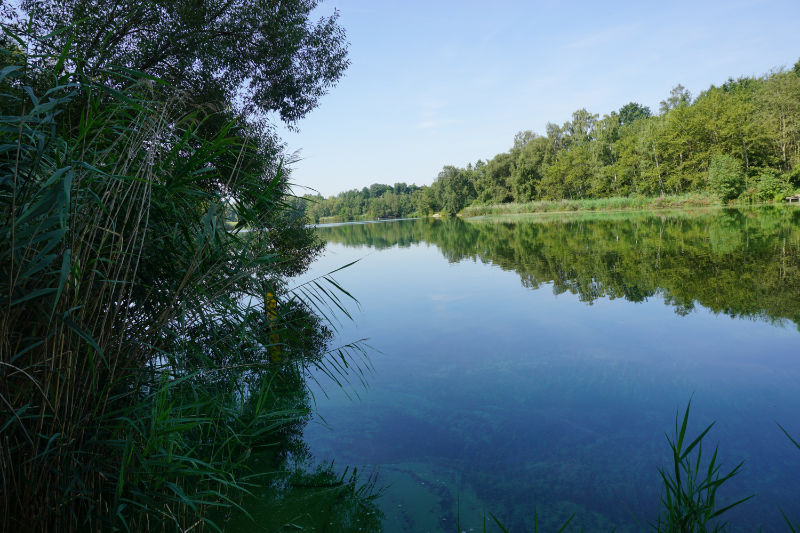 Unfortunately, the people of Nürnberg never got to enjoy the waters of the lake. After the war, the rubble of the destroyed city was dumped here and with it its silver buck. The dangerous minerals were washed into the lake which now contains toxic hydrogen sulfide. The waters of the lake are actually bubbling with it from time to time. But you can still walk around the lake!

Originally, the Dutzendteich (dozen pond) was a reservoir. Later, it also grew in popularity as a destination for excursions.
In 1906, for the Bavarian Country Fayre, a lighthouse was built that attracted even more visitors to the pond. To make room for the construction of the Congress Hall the lighthouse was demolished as well as the old swimming facilities. They even drained parts of the lake. 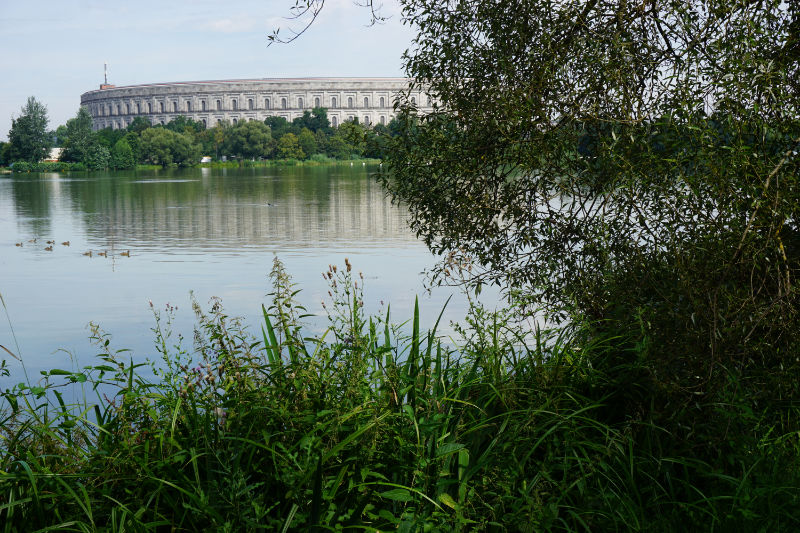 Today, the area is very inviting with its pedal boats and the nice walks along the lake. The view of the Congress Hall from the banks is great.
We were magically attracted by the lakeside beer garden at the boat rental station. We enjoyed the Sunday in a wonderful, shaded spot with a delicious beer.

The area close to the Dutzendteich was named Zeppelinwiese (Zeppelin lawn) after Count Zeppelin had landed his airship here in 1909.
The unpaved Zeppelin field was used by the Nazis as their relly ground in 1933/34. The spectators used to sit on wooden stands.
Albert Speer created a new design for the entire area around the Zeppelin field. Between 1935 and 1937 the Zeppelin stands were constructed and opposite them a rampart with 34 towers. 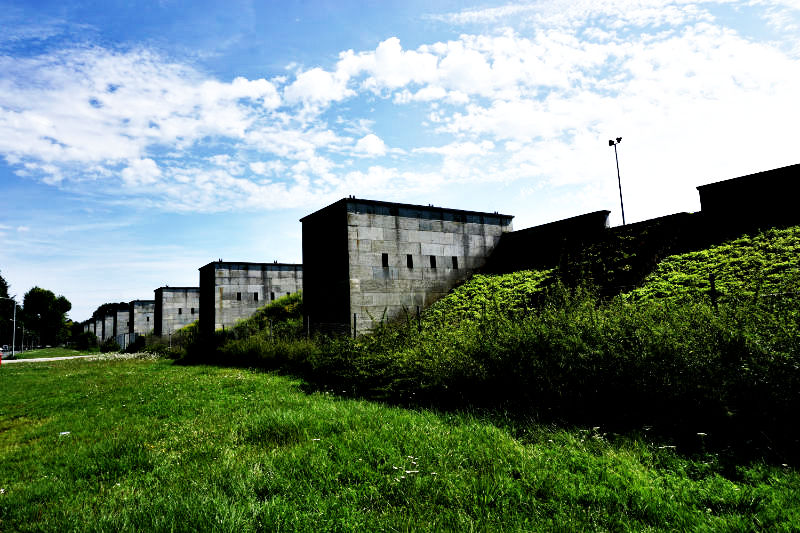 Speer shaped his designs with the Pergamon altar as his inspiration. The rampart is facing the stands, the walls around the spectators were kept much lower. The little towers housed the toilet facilities. Up to 200.000 people were able to participate in the Nazi events on the 312 meters x 285 meters of the Zeppelin field. A hall, about 8 meters in height and covering 335m², was erected within the Zeppelin stands. The walls were covered in marble and the ceiling was adorned with golden mosaics which made the hall very pompous. A staircase led from here to the honorary stands. 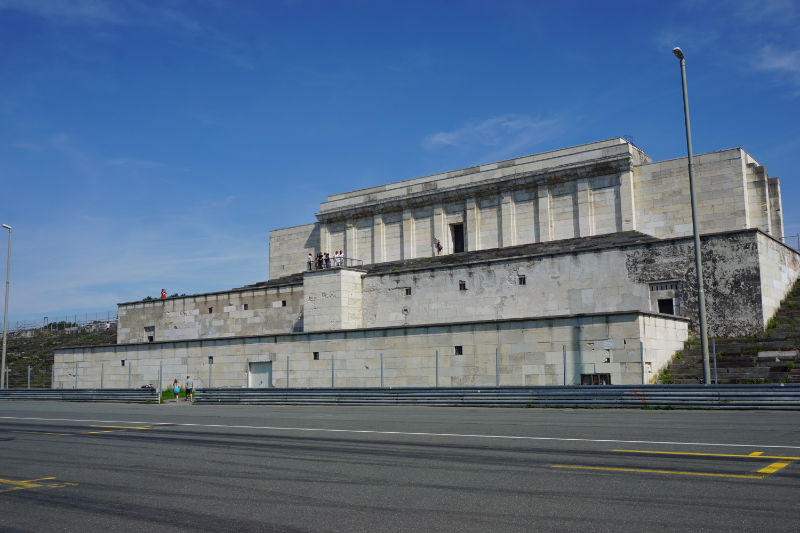 After the war, the US army used the area for sports events and parades until 1955. They blew up the big swastika on the stands to underline the end of the Nazi era.
Since 1947 the area serves as the venue for the Norisring Race, an important motorsports event. Rock and pop bands also found the area to be a suitable venue for their concerts. 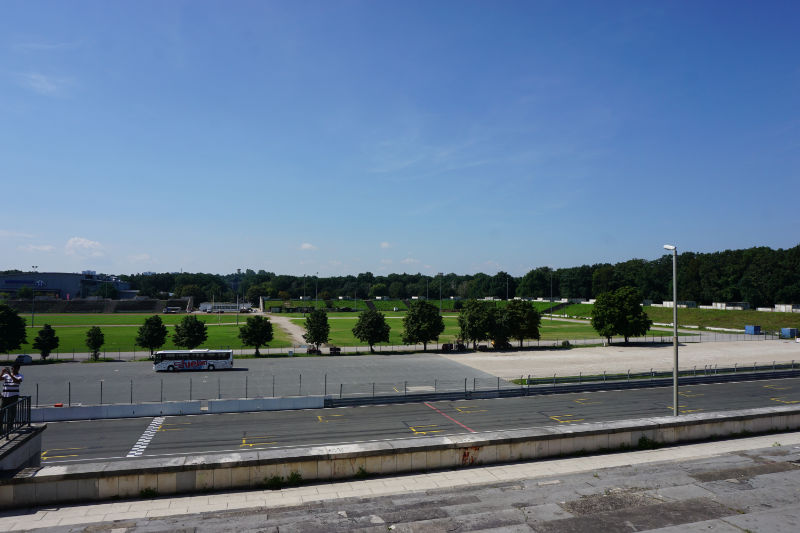 The existence of the area is heavily debated. The city of Nürnberg has to pay enormous amounts of money for the maintenance of it. Back in 1967 parts of the stands had to be removed to retain the structural integrity of the building. The big efforts to maintain the complex are not enough, the area is gradually deteriorating. The stands are so brittle that they were fully closed for a period of time. A cumbersome and laborious initiative to restore the stands one part at a time is underway at the moment. The entrance hall was repaired in 1984 and was used for exhibitions for a long time. 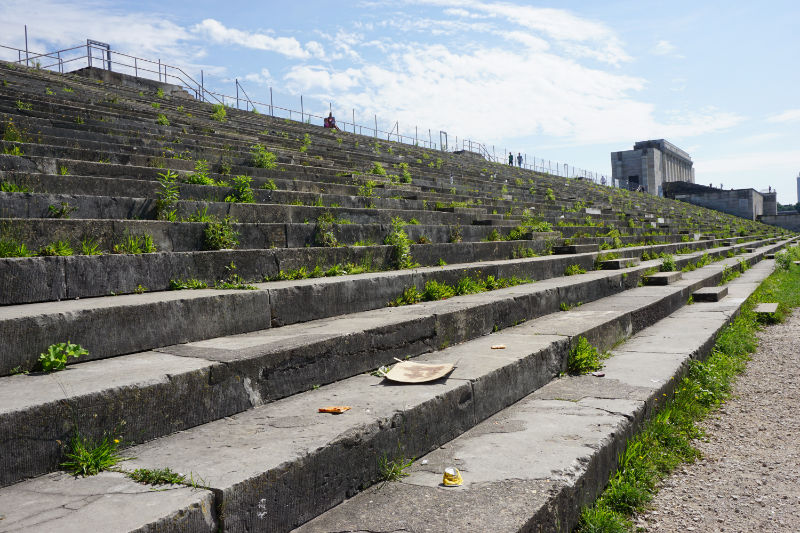 What a sight! The dimensions of the Zeppelin stands are enormous. We were lucky; we were able to go on the actual stands. Seeing the Zeppelin field from up there is impressive. I can imagine that the Nazi events must have really fascinated the spectators when the field was full of people. The light effects (which we saw on an info panel) must have given the whole event a surreal atmosphere.
I will certainly come back for a concert or even the Noris Race. The ambience must be great.

Hall of Fame at Luitpoldhain

Our last activity was a tour of the Luitpoldhain.
The Luitpoldhain was created for the 1906 Bavarian Country Fayre. The City of Nürnberg erected a Hall of Fame after the First World War for the fallen soldiers. They built the Arcade Hall with a rectangular courtyard, framed by a row of columns with fire bowls on them. 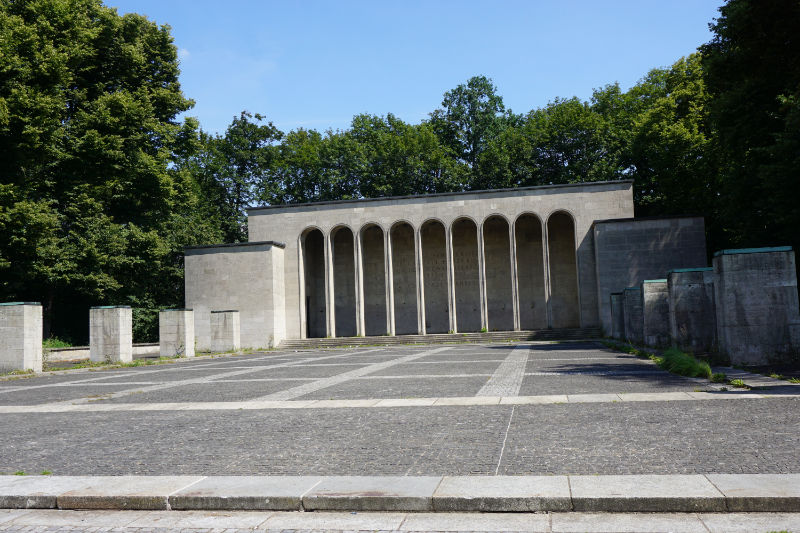 That park, too, was redesigned by the Nazis. In 1933 the area was paved and stands for 50.000 spectators were built. From then on the area was used for Nazi rallies with up to 150.000 people. Honorary stands were built opposite the Hall of Fame. The Hall of Fame was utilized in the Nazi presentations.

The area was transformed into a wonderful park after the war. The Hall of Fame commemorates the fallen soldiers of both World Wars as well as the victims of the Nazi tyranny.
When we visited, kids were playing on the lawn and enjoyed their Sunday. A nice finish to our tour that was so rich in history and visual stimuli. I will need a bit more time to digest all of that. 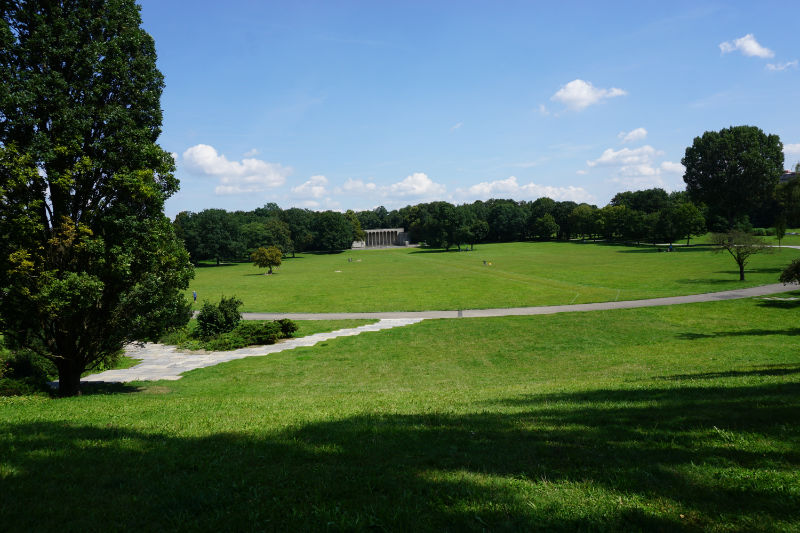 Adults: 5€
Reduced price: 3€
A visit to the Nazi party rally grounds is free of charge. 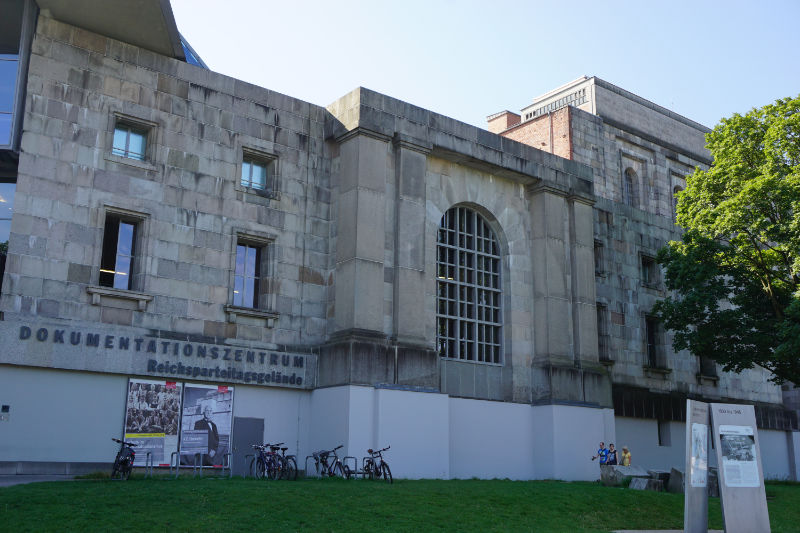