The market place in Bremen is located in the centre of the Hanseatic city. These approximately 3500 m2 are one of the oldest places in Bremen and the spot with the most visitors.

Standing in the middle of the market square, you have a great view of the buildings framing it. This panorama feels harmonious to me. The buildings are very uniform due to the use of sandstone, dark brick and clinker and simply fit together.

Some of the buildings have inspired me so much that I would like to introduce them briefly.

The northeast side of the market square is dominated by the Bremen Town Hall. The Gothic-style building was added to the list of UNESCO World Heritage sites in 2004. The present facade was renewed in 1608 -1612. 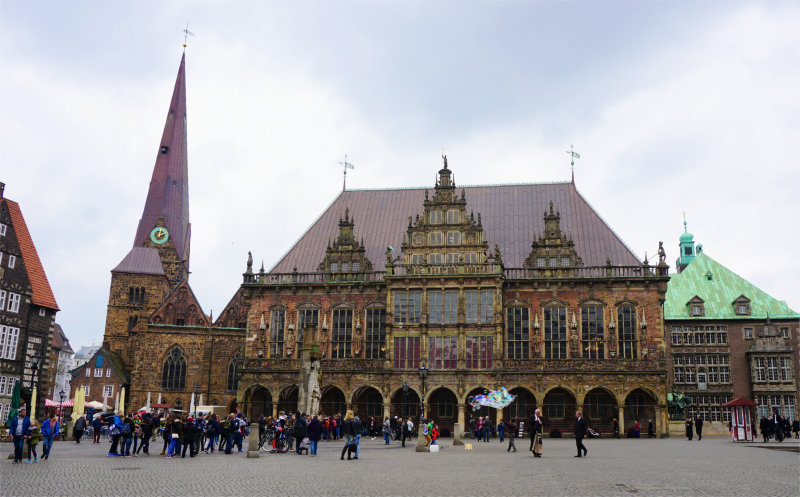 I especially like the gables of the town hall. The ornaments and the small figures look very filigree from afar and give it a distinctive look. 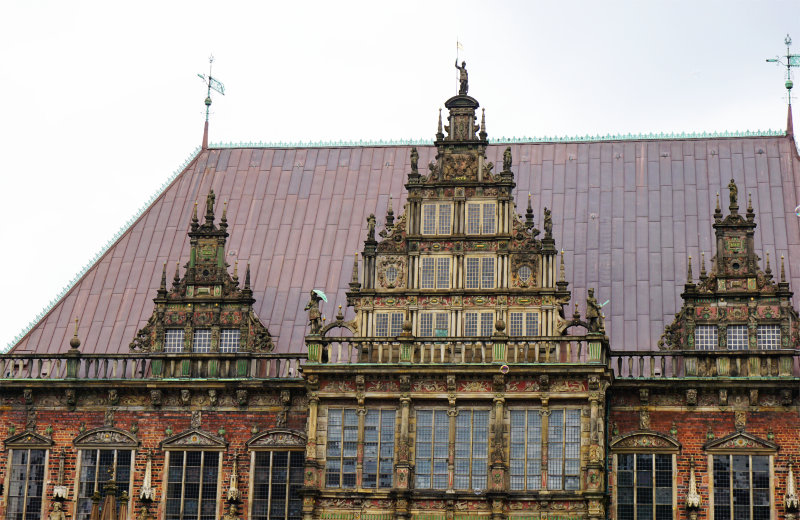 Really impressive - even though it was cold and very wet - was the sight of the Bremen town hall by night. The lighting is beautiful and gives the place a romantic touch. 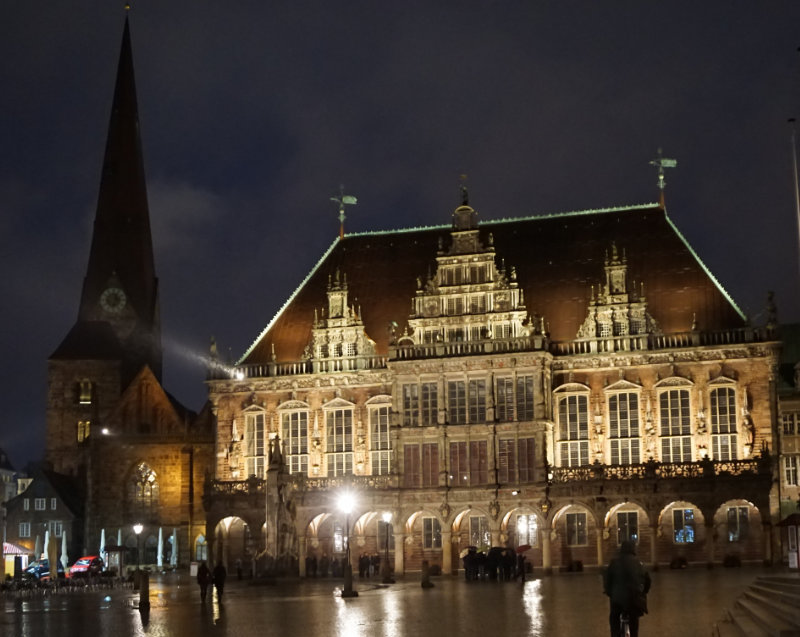 The south-west of the market square is characterized by the Schütting, the headquarter of the Chamber of Commerce of Bremen. In 1537/38, Bremen merchants built a renaissance building, reminiscent of buildings in Flanders. After the destruction in the Second World War, most of it was rebuilt in 1956 in the original form. Since 1973 the building has been declared a Historic Monument. 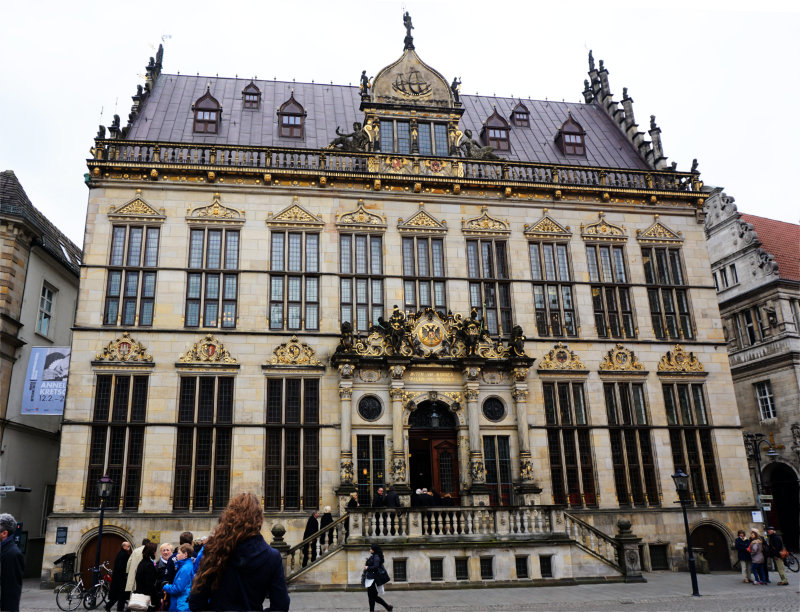 Schütting is the name for the house of a guild. Other Schüttings are found in Bergen (Norway), Lübeck, Lüneburg, Oldenburg, Osnabrück and Rostock. These buildings were not only used for administrative tasks of the guild but also served as accommodation for foreign merchants. But also this building was not spared from the destruction of the Second World War. The house is, however, largely reconstructed in its original form. Today, the wide outside staircase that leads up to the splendid main entrance can be admired again. This ensemble is crowned with the words "BVTEN VN BINNEN AD WAGEN VN WINNEN" ("outside and inside - dare and win"). 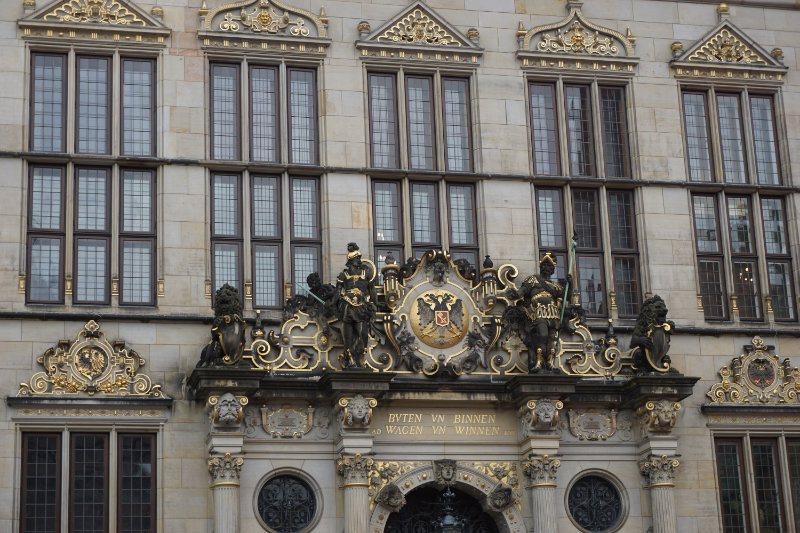 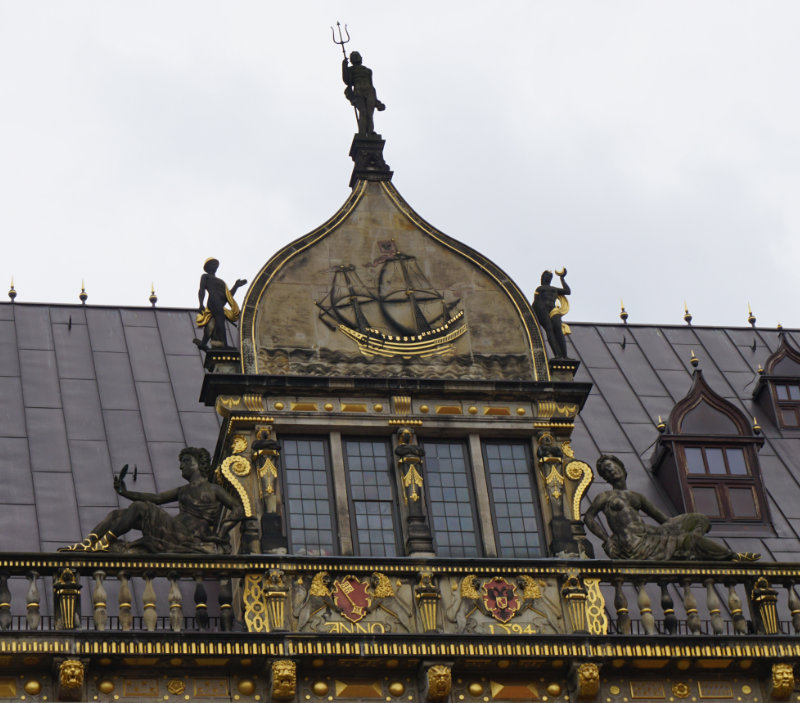 Today, the Schütting is home to the Bremen merchant team and headquarter of the Bremen Chamber of Commerce. On the ground floor are some rooms of the traditional "Club zu Bremen" (Club of Bremen).

The Schütting is illuminated in the evenings and adds a very special glow to the market square in Bremen. 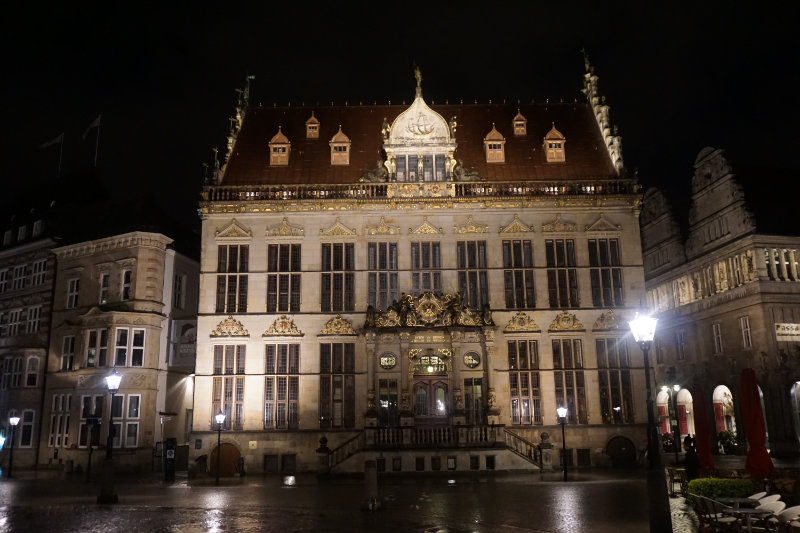 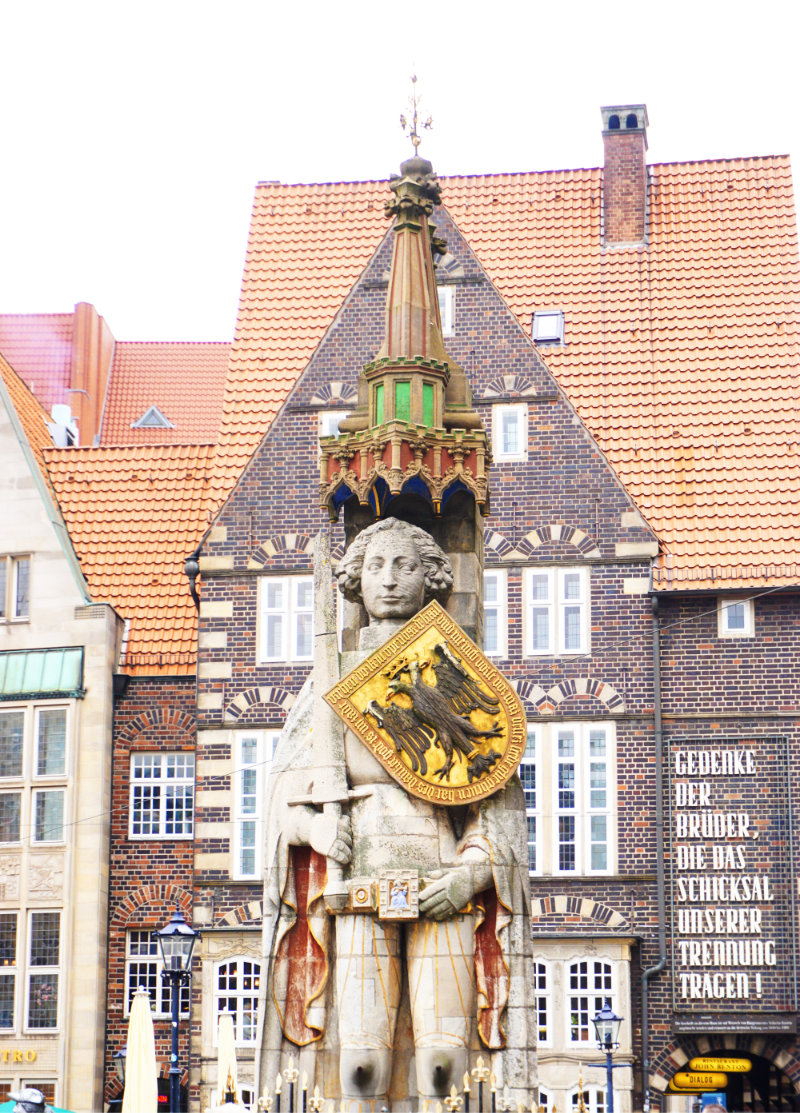 The Roland on the market square in Bremen

The Roland of Bremen stands on the market square in front of the town hall. It was created in 1404 and is a symbol of Bremen's freedom and city rights. According to legend, he intentionally looks at the cathedral’s portal to remind the clergy of the existence of the city council.

The figure is made of limestone and is 10 meters high. It represents a knightly gentleman. He wears a leather jacket, a chain armour, a belt, a sword, and a shield. The Emperor's emblem he carries (it is false) bears the inscription:
"Vryheit do ik yu openbar
De karl and mennich vorst vorwar
Desser stede ghegheven has,
The thank you gode is min radt. "
That translates to
"Liberty, I proclaim,
Which Karl and many other princes, indeed,
have given to the city.
Thank God, this is my advice "

In June 2004, the statue has been declared UNESCO world cultural heritage.