A visit to the island of Corfu is not just a beach holiday. Here you can walk on Sissi's tracks, explore a beautiful hinterland away from tourism and explore small towns. 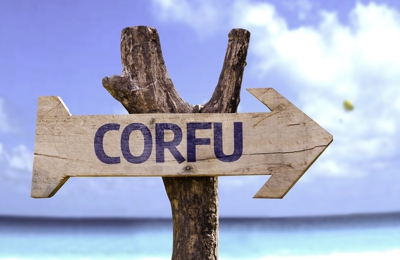 We would like to introduce you to the holiday region of Corfu. Look at Corfu with our eyes and discover some wonderful places to visit, which should not be missed in your holidays.

In our little video you can discover some nice places. 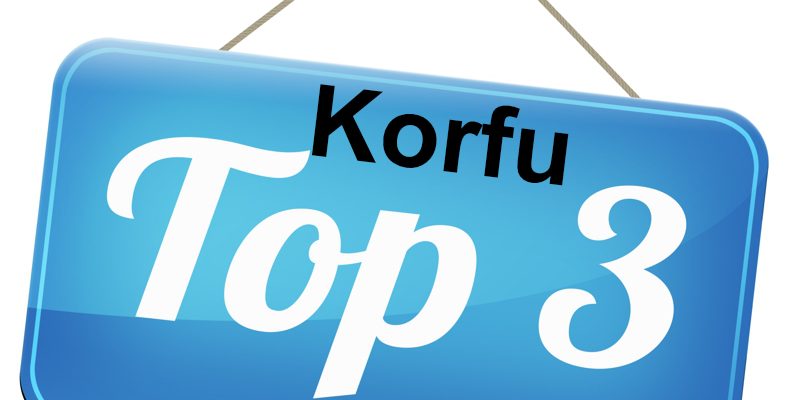 We would like to introduce our top 3 destinations on Corfu. Discover the most beautiful places of Corfu, where, whether by car or by public transport, an excursion is worthwhile.

Our top 3 excursion destinations in Corfu 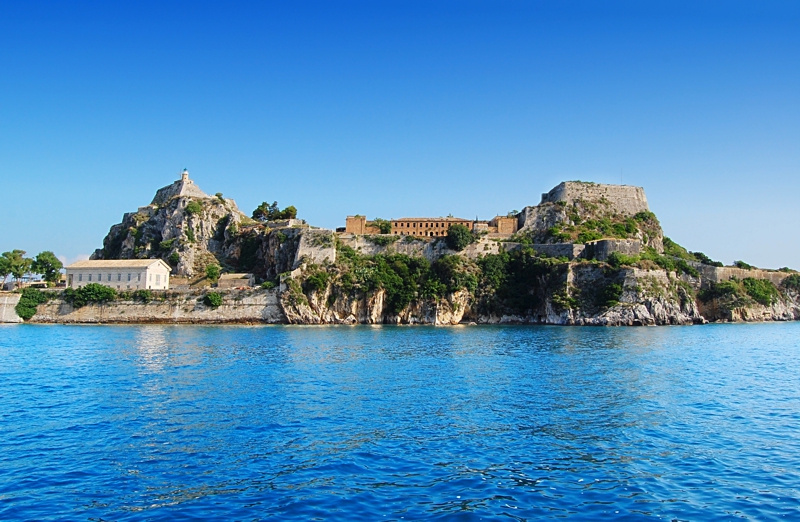 1. Ancient fortress in the capital Kerkira

A visit to the Old Fortress is a must if you visit the capital of Corfu. The entrance fee is low and you can spend quite some time here. A small tip: dare to leave the main road. The fortress has some hidden corners that stir imagination like only old fortresses can.

We went to this small castle when it was pouring down. The Achilleion is located on a small mountain and from here you have a nice view over the island.
It was certainly a bit busier in the museum because of the rain, but we could still get an impression of Sisi's little paradise.
As a Sisi fan, the path through the garden was a "must do" despite therain. It dawned on me very quickly why the Empress of Austria felt so comfortable here. 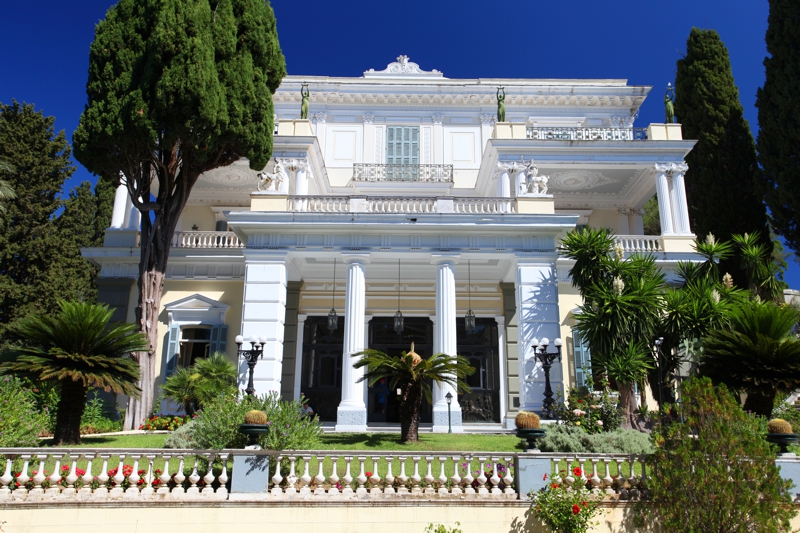 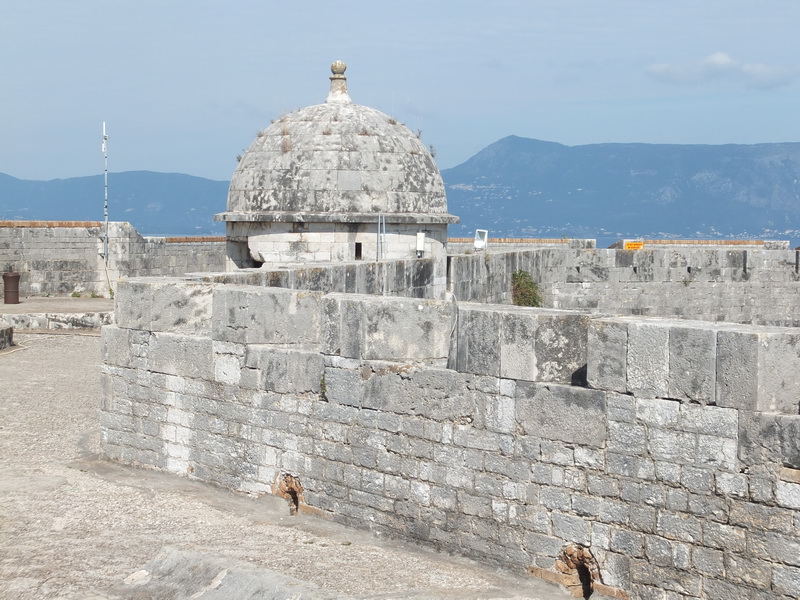 The New Fortress in Kerkira is slightly elevated and offers a spectacular view over the city.
We were not asked for an entrance fee on our visit but this changes during peak seasons where a small fee has to be paid. 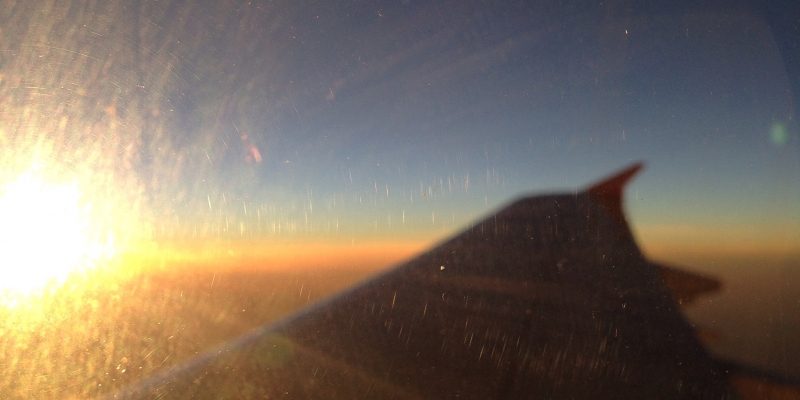 Our flight to Corfu was very quiet and easy. Unfortunately, we landed in complete darkness at the Corfu Airport, otherwise we would certainly have experienced a visually very nice approach. I was able to watch it on a screen, a video straight from the cockpit. We really missed out on something here.

My first encounter with the airport Corfu, respectively with the sanitary facilities there, was horrific. And I am really used to a lot through working in schools!
There was a toilet area in the arrivals hall, where you also get your suitcases back. All in all, there were 7 stalls, which surely are not many for the lady’s room, but should be sufficient ... If, oh, if all of them had actually been usable. In 2 of the stalls there wasn’t even a toilet bowl, in two others the toilets were out of order and covered. The cleanliness and quality of the remaining 3 toilets were catastrophic.

Tip:
Just before the landing, use the toilets in the airplane!

Our return flight was also announced for the late evening.
We were picked up at 6 pm together with other guests from our hotel who wanted to fly to Hamburg and Düsseldorf. Our flight to Berlin was scheduled for 9:15 pm.
Upon arrival we were greeted by a nervous member of the TUI staff who announced that only passengers for Düsseldorf and Hamburg were to proceed to check-in. The flight to Berlin is delayed and in order not to hinder the check-in process for the other passengers we were asked to wait on the side of the airberlin check-in area with our suitcases. A look to the information screen told us: an announced delay until 10 pm.
When the check-in counters got a bit quieter, we decided to at least get rid of the luggage. So we queued and actually received our board cards. The baggage drop off turned out to be more complicated. Weighed and marked at the check-in desk, we needed to take them with us again only to bring them over to another desk. So we went over to the next long queue which was only for passengers waiting to drop off their luggage. All items from all 8 desks needed to go through one scanner before they finally disappeared on a conveyer belt towards the airplanes. By this time, a good 50 minutes had passed. Hard to imagine how this would play out with even more than three flights ready for check-in at once.

As our flight was still delayed according to the information screens, we sat down in one of the restaurants with a good view over the runways. Every now and again I eyed the ques for security checks in the departure hall, which were also very long. Obeying my warning gut feeling, we decided to go and que as well. Here, the underwhelming total of three scanners were used for all the passengers. So we waited again…
Meanwhile an announcement over the speakers told all passengers with easyjet to England to “please pick the checked in luggage up again. We have buses back to the hotels waiting in front of the airport. New departure time of the flight is tomorrow, 8:45 pm.” So a flood of passengers from the other side of the gates streamed back out through security to the departure hall and had to push through the waiting people.
After we finally passed all security controls it had gotten 8:30. Our flight was still scheduled for 10.
Another visit of the airport toilets, as much as the memory of my fist visit told me otherwise, had unfortunately become necessary at that time. At least these toilets were a little better and, first and foremost, cleaner.
After barely being back in the waiting area, another announcement informed all passengers to Berlin to proceed to boarding through gate number 2. It was only 8:45 and our flight was on time after all! Unfortunately, due to the still false information in the departure hall, not all passengers had passed through the security control so we had to wait for them. But he really very capable airberlin cabin crew informed the ground staff and we were able to start almost on time.

We have not seen such a mess yet! 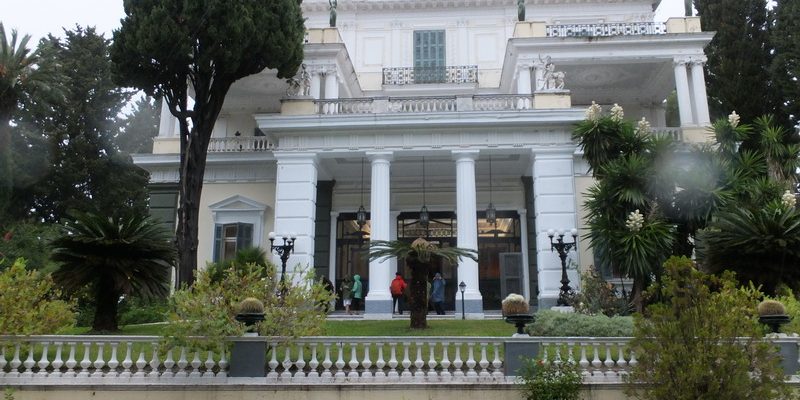 The Achilleion is Corfu’s most popular excursion destination. The small castle is situated high above the east coast in the middle of a beautiful garden.

Empress Elisabeth of Austria (Sisi) had it built and spent several holidays in the Achilleion in Corfu. Later the German Emperor Wilhelm II bought the castle and spent the Easter period here.

We decided to visit the Achilleion on one of the few rainy days in Corfu. The bus rarely ever drives up the mountain and 2 km uphill in the pouring rain didn’t sound very appealing to us. So we called a taxi that picked us up in front of the hotel and also drove us down again on our way back. But in the end, we were wet nevertheless!

Hoping the rain would subside, we first had a look around in the museum.

The magnificent staircase was especially impressing. The clever colour design and the sophisticated use of mirrors make it appear huge.
A small curiosity can be found at the desk of Kaiser Wilhelm. His desk chair sways like a rocking chair and the seat has the form of a horse saddle. So as early as 1907, there were back-friendly seating arrangements (like what we use for dynamic office chairs now).

The highlight of the Achilleion is the park-like garden. Despite the constant rain, we walked through the park.

Particularly beautiful are the many fine sculptures, which not only dominate the huge terrace but are also scattered around the garden as eye catchers. Sisi is said to have had a taste for the "dying Achilles", whereas Emperor Wilhlem preferred the "Victorious Achilles." 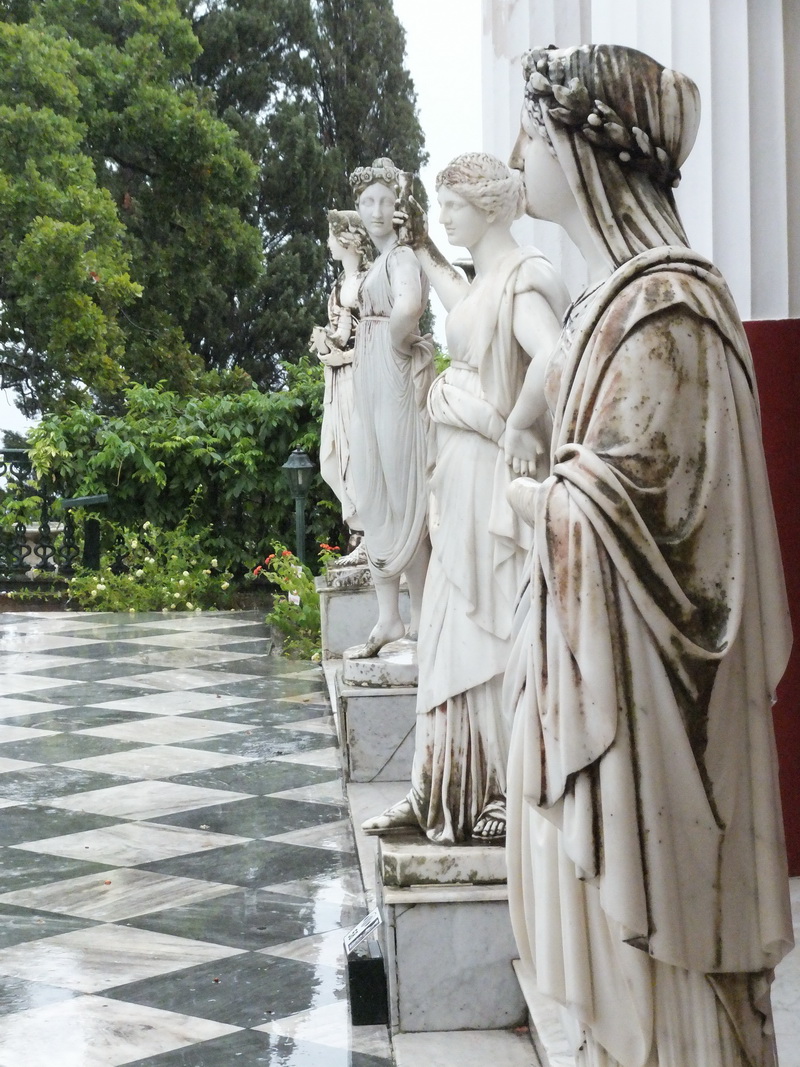 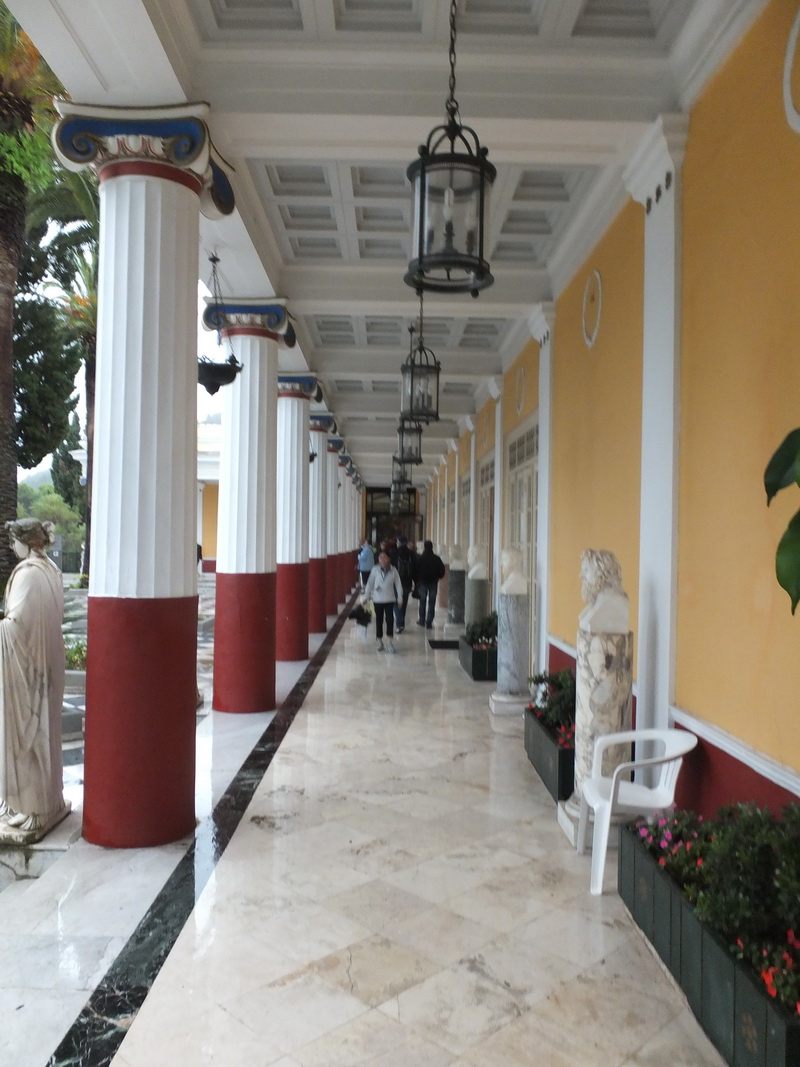 A really nice place, which is totally worth its entrance fee. 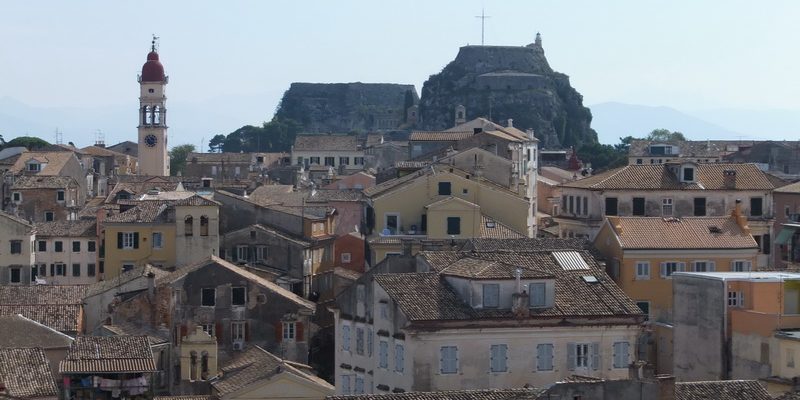 The city of Corfu or Kerkira is different from many other Greek cities. Its development is reminiscent of the fact that the Venetians ruled over it for many years before the British took control for another 50 years.

END_OF_DOCUMENT_TOKEN_TO_BE_REPLACED 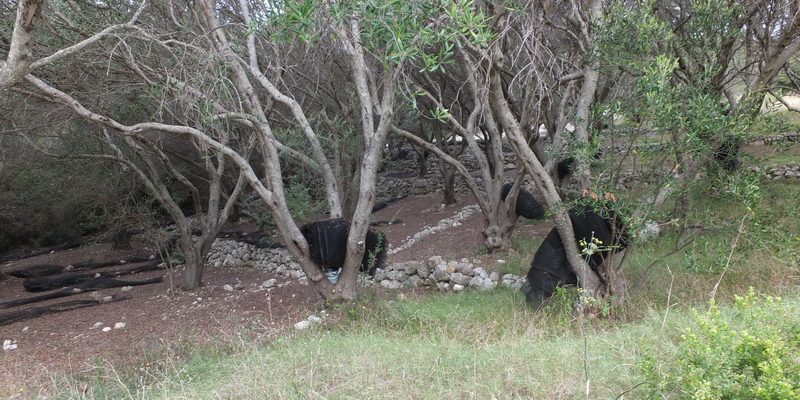 In the morning, when the temperatures are not yet too hot, the hinterland of Corfu is ideal for short walks. Especially there you can often find the original village structures and small restaurants with delicious food.