Amsterdam is a port city in the Netherlands. It is the capital of the kingdom, where approximately 800,000 people live.
A vibrant city with fair, which is always worth a visit. 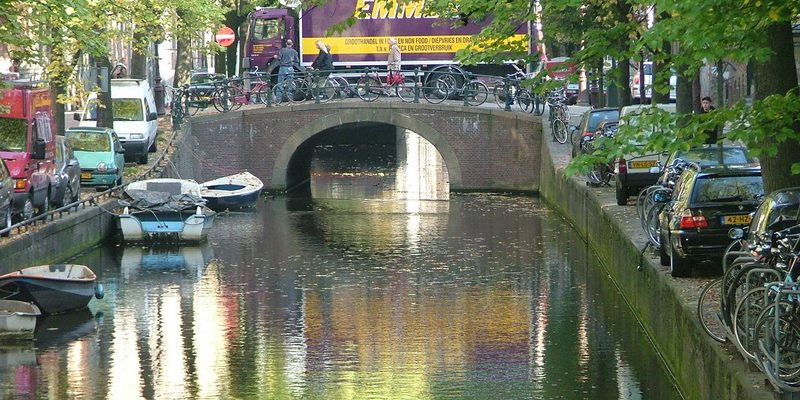 Amsterdam
A walk through Amsterdam

Anyone who walks through a city with open eyes will discover some interesting things. We have compiled impressions from Amsterdam for you.

The Magere Bridge is one of the most famous bridges in Amsterdam. The drawbridge was built in 1871 and is essentially mostly a replica of the old bridge of 1670. About every 20 min, the bridge guard closes the passage and boats can pass through. Afterwards, the guide rides his bicycle to the next bridge to repeat the process.

There are so many different bridges in Amsterdam. Sometimes you have to plan your way very precisely so that you don’t miss your spot to cross the many canals in the right places, otherwise you can end up with big detours.

Of course, The Netherlands also mean cheese. If you have time, you should go to one of the typical cheese shops. It is a satisfying treat for the nose and the taste buds.

Who takes a closer look might discover various curious shops. We have taken some pictures of some unusual shop window displays, which don’t always give away the exact business of the shop at first sight. But do not just look down when window shopping! Also a look up is worthwhile. Many of the houses have beautiful facades with small details which tell a lot of stories about the history of the city. 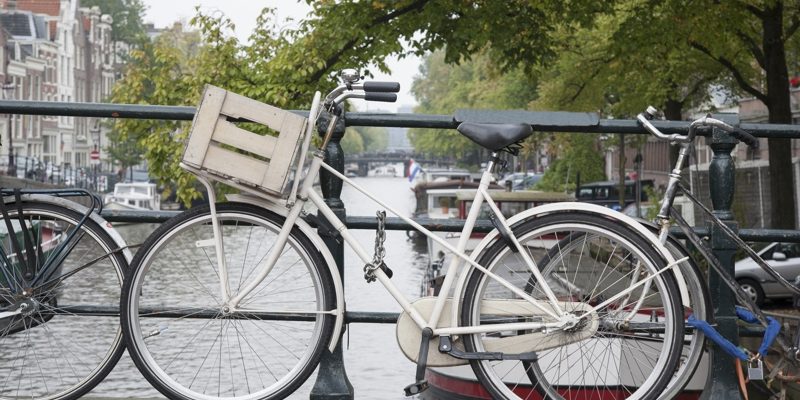 Oude Zijde, that means "Old Side", is the easternmost district of Amsterdam. Originally, it was only a narrow strip on the eastern bank of the Amstel, but the district was soon enlarged by the influx of many Jewish refugees from Portugal.

Museums, churches, synagogues, historical buildings and monuments can be found in Oude Zijde almost at every corner. We did not even see a fraction of it in our short time in Amsterdam. 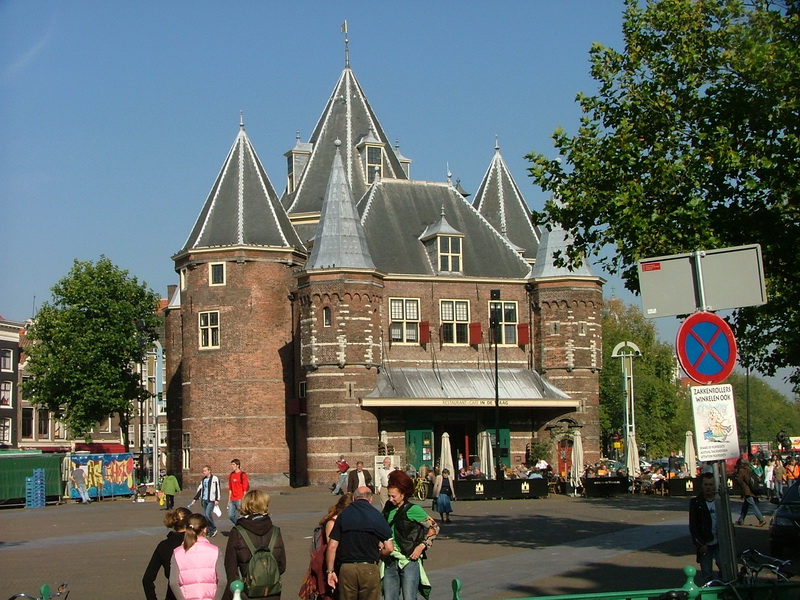 The Waag is the oldest preserved city gate in Amsterdam. It is located on the Nieuwmarkt.
It was built in 1488.
Previously, public executions took place here. In 1612 the official town weighing scales were erected here. The farmers from around the city came here to have their goods weighed to be then taxed accordingly.
The building has been used as a fire station after 1800. Today it is a restaurant.

Unfortunately, the restaurant was closed when we walked past. The menu looked very good.
It is not easy to tell that this building was a city gate but nevertheless I just thought it’s beautiful.

The Zuiderkerk is the first church in the Netherlands that was built for the Protestants.
In 1603 Hendrick de Keyser designed the Renaissance church. The tower with pillars and bulbous spire is a landmark of Amsterdam.
At noon, between 12 and 13 o'clock, different pieces of music can be heard from chimes in the tower. We were lucky enough to be on time to listen to the music.
After 1929 no church services were held in the church anymore.
Today, it serves as an info centre and holds a permanent exhibition on the urban structures of Amsterdam.

The Zuiderkerk had me very impressed. The tower looks very delicate and I liked the colour design. 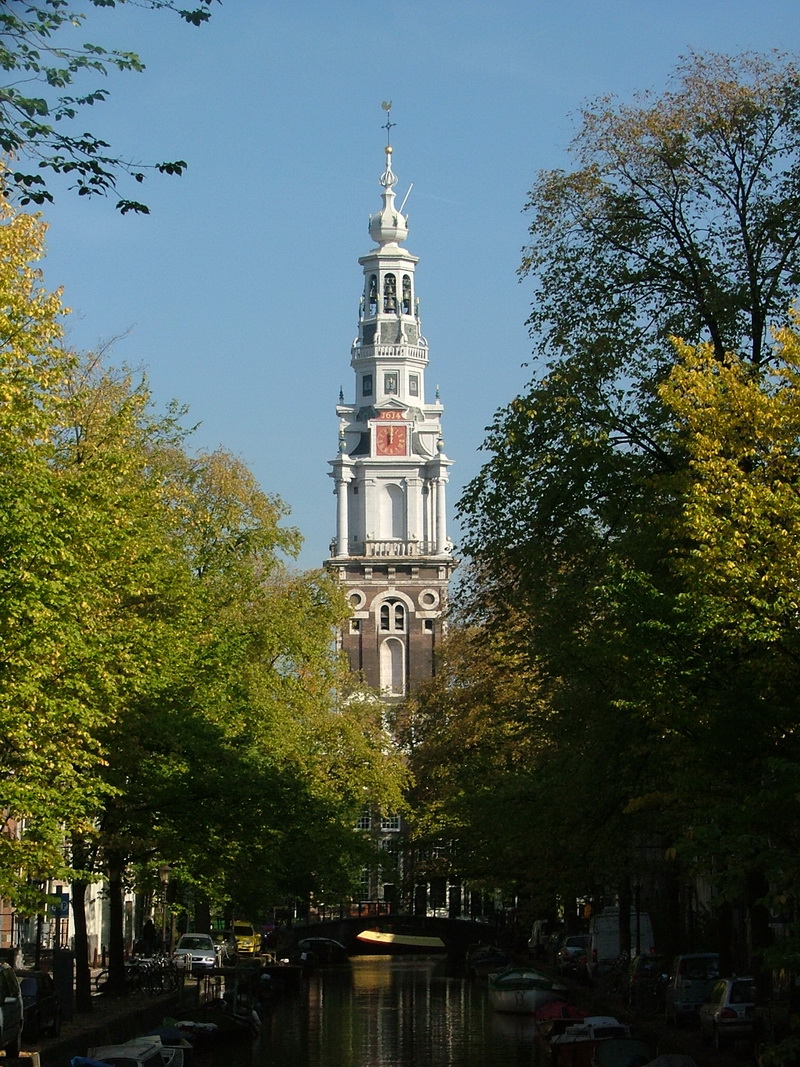 In 1512, the lower half of the Montelbaastoren was part of the city fortification of Amsterdam. It stood close to the city wall and was supposed to help protect the shipyards and workshops.
In 1606 the octagonal part and the wooden top were added according to the design of Hendrich de Keyser.
Today this building holds administration offices.

We only saw the building in passing whilst on a canal tour. Too bad that we didn’t have enough time to come back for a closer look. 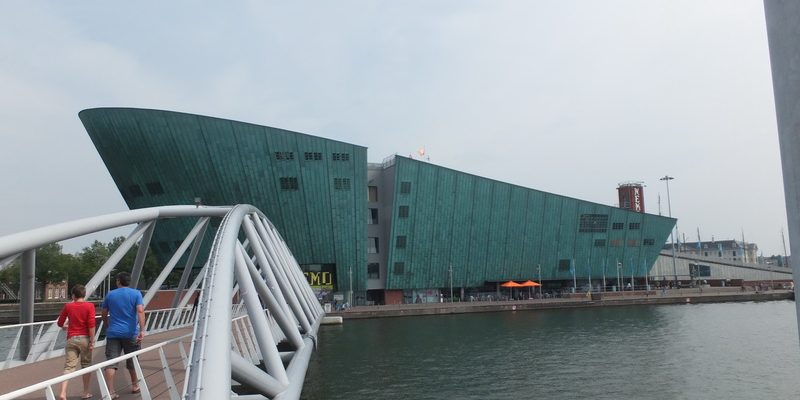 There is an unusual building in the harbour of Amsterdam which can be seen from afar. Only when standing in front of the entrance door it becomes apparent that it is a museum.

Renzo Piano designed this unusual building, which is often compared to a ship. The building was built directly on the roof of the IJ tunnel and serves as a truly unusual entrance into the tunnel. 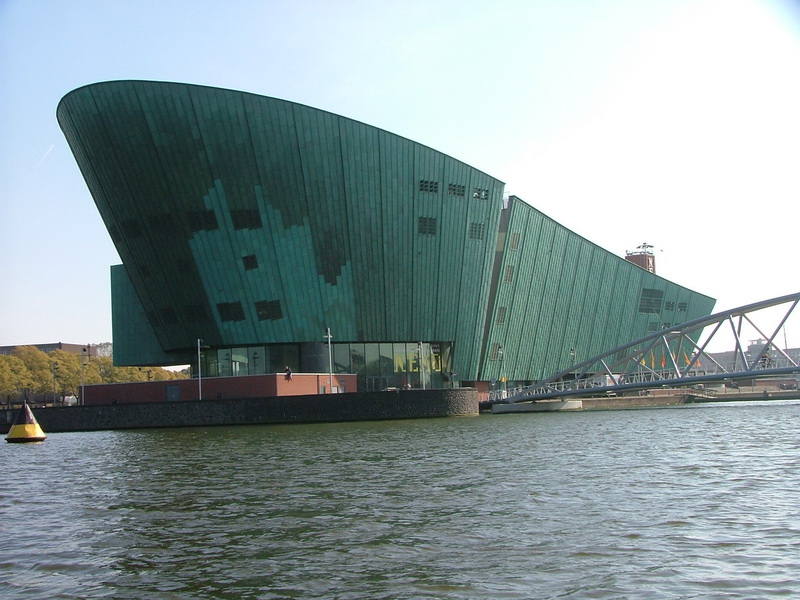 The NEMO is a technology museum that was opened in 1997 under the name "New Metropolis". In 2000 it was renamed and it is estimated to be visited by some 300,000 visitors each year.

On 4 levels, the NEMO Museum presents a series of hands-on experiments that allow interesting and exciting insights in different areas of science for both kids and adults alike. In the Biology section, for example, the topic “DNA” is explored and visitors can embark on a journey into the human brain. A science show, which is offered several times a day, doesn’t fail to inspire (not only) the kids with astonishing scientific phenomena. The museum allows to touch and understand physics, chemistry and biology. Actually, it is aimed at children from 6-16 years, but many adults marvel at the explanations here as well.

A particularly beautiful spot can be found on the slanting roof of the museum. From here you have a great view over the entire city. You can access the rooftop for free when there are not too many visitors in the museum. The view was good and we found some rest from the hustle and bustle of the city. 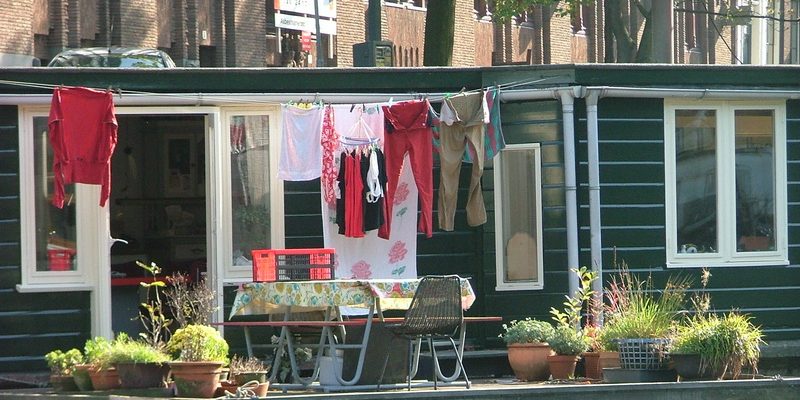 Besides many beautiful buildings, Amsterdam is famous for its canals. Whether by boat or walking past the canals in Amsterdam, exploring them is worthwhile since there is plenty to discover.

“Gracht” means as much as a canal or a moat, connecting narrow, often artificial waterways. Particularly well-known are the canals in Amsterdam. The entire inner city area is crossed by canals, which in turn are spanned by many bridges. 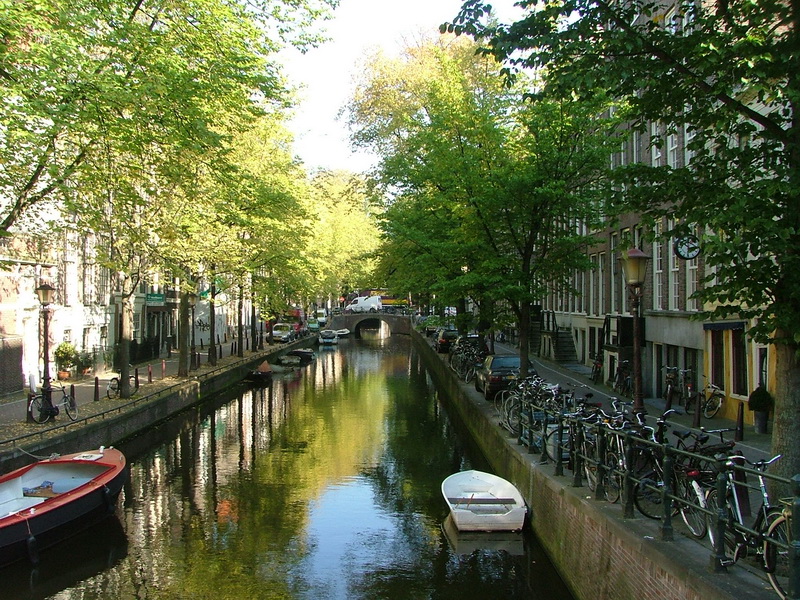 Particularly beautiful are the Herengracht, the Keizersgracht and the Prinsengracht. This is also where most of the canal tours start.

We have discovered some beautiful houseboats in the canals of Amsterdam. For a long time, a houseboat was a cheap alternative to an apartment in Amsterdam. Nowadays, the prices for the boats are often as high as for apartments, but the inhabitants of the waterways of Amsterdam value their lifestyle. The initial idea of having a ​​mobile living space is hardly possible in today’s Amsterdam, though. 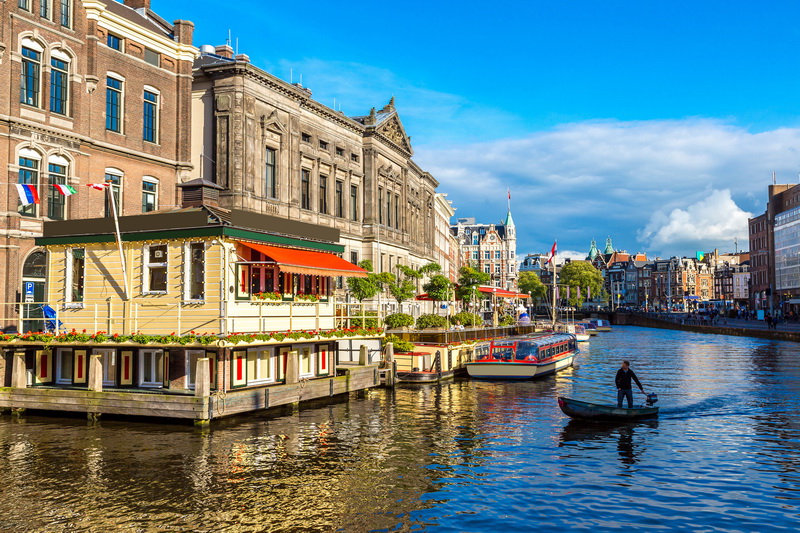 Amsterdam is also a city of bicycles. Apparently, these are often not secured well enough when parked on the side of the canals. On our round trip, we discovered a boat that was fishing bicycles out of the canals. And it was loaded to the brim with them! 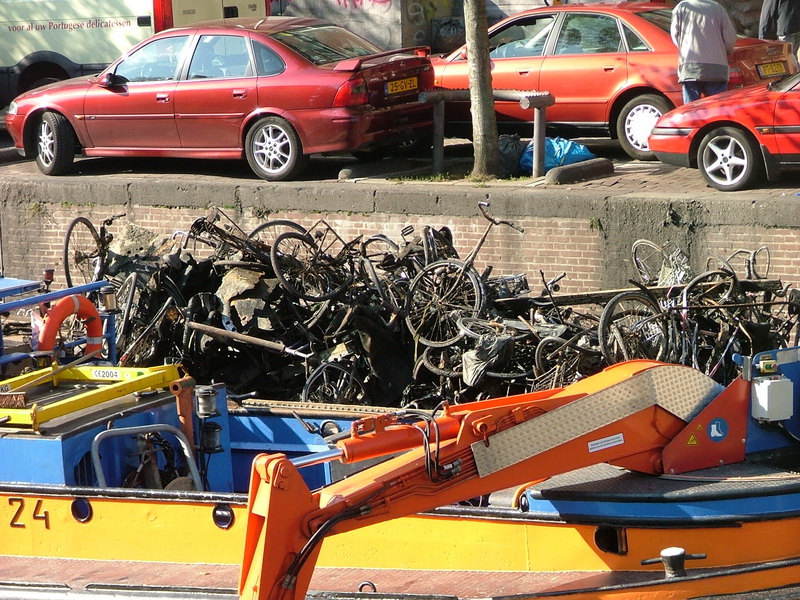 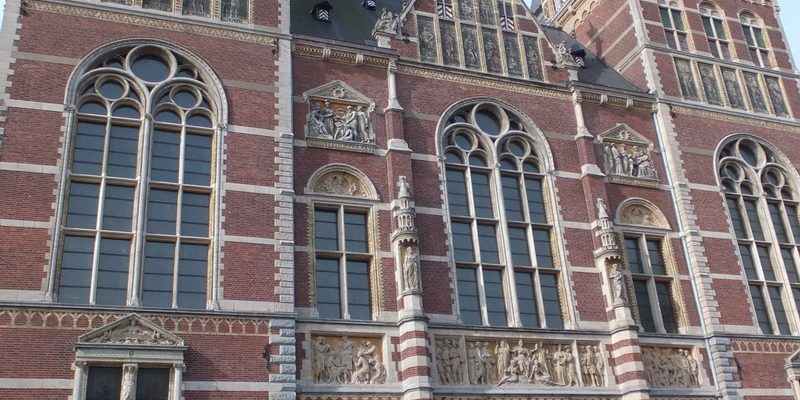 The Rijksmuseum is one of the landmarks of Amsterdam. Here you can see an outstanding collection of Dutch art.

The museum is way too large for all the treasures inside to be discovered in one day. The approximately 2 million visitors can admire some 8,000 exhibits here.

The museum building alone is worth a visit. After evaluating a few designs construction started in 1876. Numerous decorative elements inspired by Dutch art history found their way into the design, both inside and outside. In 1885 the building was finally opened. 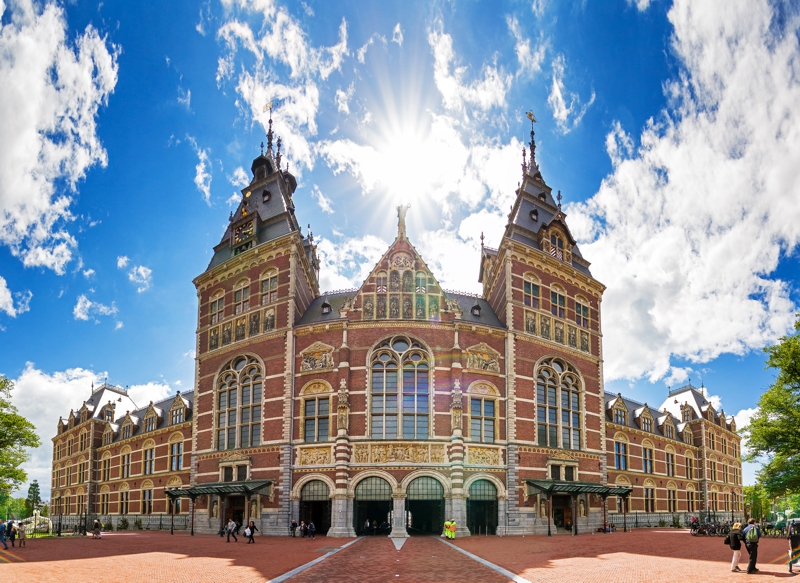 The collection of paintings includes the works of many important artists. Frans Hals, Rembrandt and Jan Steen, just to name a few.
Rembrandt' s “The Night Watch”, for example, attracts visitors like a magnet. Many groups are brought to the Rijksmuseum on buses to see it. Most of them only take the time to see as little as two or three other rooms. It is a pity because with a little time you discover more treasures such as "The kitchen maid" by Jan Vermeer or the "A Woman at her toilet" by Jan Steens. 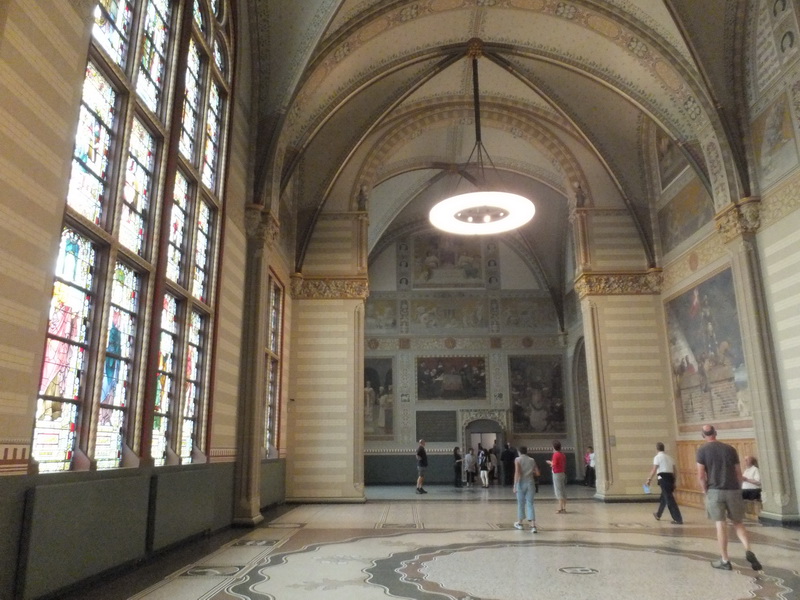 The library also impressed us very much. The reading room can be seen from the outside. Reading here really is a journey to the past.

If you go to the museum before 11 am you have a realistic chance to admire the beautiful paintings before the travel groups arrive.
Werbung 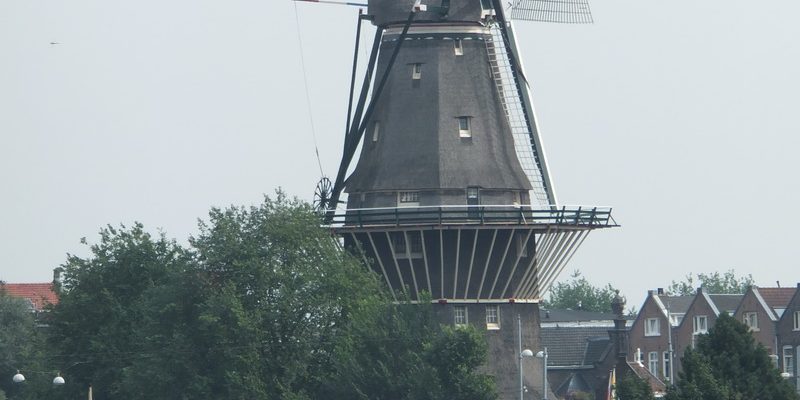 What we wanted for our trip to Amsterdam was a hotel, that is not only in a convenient location close to the airport but also quite central to avoid long journeys through the city.

Our choice fell on The Manor Amsterdam. This Hampshire group hotel is located in Amsterdam - Oost. This historical hospital has been transformed into a really nice hotel.

The hotel itself and the rooms are very modern and have free WiFi. We had a very quiet room and slept very well.

The breakfast buffet left nothing to be desired in the morning. The staff was very friendly and helpful.
We did not test the restaurant.

The location of the hotel is very convenient. Located on a busy street you have public transport stops nearby. Whether by foot or by tram, you can reach the city centre in a short time. The Oosterpark in the immediate vicinity is very inviting for walks.
We especially liked the young audience in the pretty hip district. Nice bars and restaurants with outside seating are in the immediate vicinity and are open late so that you can enjoy the buzzing city nightlife.