Saxony-Anhalt is often ridiculed as a holiday region. But here the recreation seekers not only find the Harz, but also the Magdebuger Börde, which invite to hiking. A region in Germany, which has largely been spared from mass tourism. 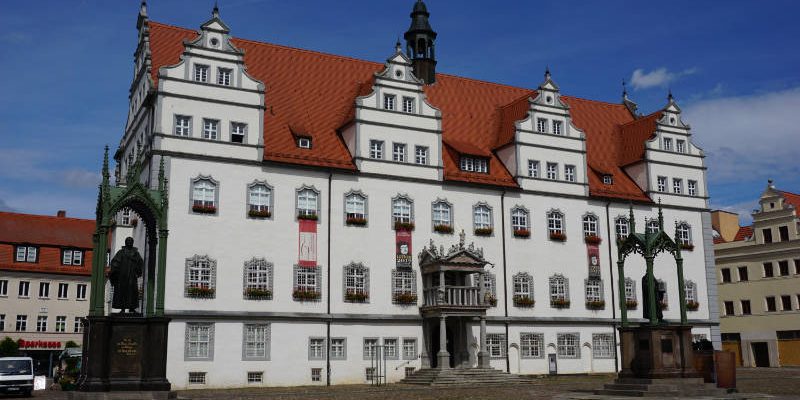 We have been passing the station Lutherstadt Wittenberg on our commute for ages. So one day, we just got off there. And that was a good idea!

In 1938 the town Wittenberg got formally named Lutherstadt Wittenberg. The town is next to the Elbe, a good 70 kilometres from Leipzig, in Saxony-Anhalt. The town looks back on a long and eventful past and used to be a hub of political, cultural and artistic developments in the 16th century. It was here that people like Martin Luther, Philipp Melanchthon and Lucas Cranach the Older lived and worked. Today, Lutherstadt Wittenberg is home to several UNESCO World Cultural Heritage Sites that should definitely be paid a visit. On our little stroll through town, we passed three very interesting sites. The oldest building in town is the Parish Church St Mary. Documents about this building date back to 1187.

When almost the entire interior of the church was destroyed or removed through Iconoclasm in 1522 Luther returned from the Wartburg Castle to hold his famous sermons here.
The church is regarded to be the centre of the Reformation. It was here that the Holy Mass was celebrated in the German language for the first time and bread and wine were given out to the public.

The painter Lucas Cranach the Older designed the altarpiece and other panel paintings in the church. Other well-known artists were involved in the creation of the baptismal font.

The biggest church in town, the Castle Church in Lutherstadt Wittenberg, is visible from afar. The tower is 88 metres high and I am sure that the view from up there must be spectacular.

In 1517 Luther published his 95 propositions which are known as the starting point of the Reformation. The famous door on which he hanged his propositions was destroyed in a fire in the 18th century.

A replacement was given to the town in 1858 by Friedrich Wilhelm IV. The text of the 95 propositions was carved into this “Proposition Door” and it was also embellished with carvings of music-making boys and their instruments.

There are daily tours through the church but on the day of our little trip, the nave could not be visited due to a wedding. The Luther House is located in the backyard of the Augusteum, an annexe of the University of Lutherstadt Wittenberg. Today, it is a museum.

In 1503 the area was handed over to the Augustin Friars to build a monastery. The so-called Black Monastery became the centre of education for the Augustin Friars in Saxony and also their primary residence. After becoming a priest, Martin Luther joined the monastery and lived there during the time he obtained his doctorate in Bible studies. After the Reformation Luther and his family moved back into the then empty monastery and lived there until their death.

Renovation works were going on in the building until March 2017 and made it impossible to see very much of it. We visited the monastery shortly before the works started and were able to see the backyard. The entrance to the yard with its beautiful inscriptions is something I particularly liked. Ferropolis – or the iron city – is a museum in Gräfenhainichen, east of Dessau. It is a former opencast mine known as Golpa-Nord where brown coal was mined. It was shut down in 1991 and transformed into an open air museum and venue for special events.

Until 1995 5 massive pieces of large equipment were brought here from all over the area and were then opened to the public. Today, visitors can not only experience the former mine, they can also enjoy concerts and other events here.

We came to Ferropolis to see the Fisherman’s Friend Strongman Run, a 10 or 20 km night run across an obstacle course. We arrived well before the event and had enough time to have a closer look at the heavy machinery.

A spreader consists of an undercarriage, a rotating superstructure with a boom for ejecting the spoil and a material intake. It is used for dumping the spoil of the opencast mine.

The spreader Gemini operates on rails and can be rotated. The massive construction was built in 1958 and has to be operated by 6 to 8 people. Bucket-chain dredgers are used in opencast mines and underwater mines. The material is dredged with buckets that are fixed to a chain. Rotary excavators are the world’s biggest diggers. They, too, are built on an undercarriage but they have a superstructure that allows to take on spoil on a blade wheel on a boom. The rotating blade wheel takes on the spoil and lifts it on to a ramp that leads to a conveyor belt from where the spoil is led away from the machine. Standing next to this rotary excavator makes you feel very, very small. The blades are huge and the output of this machine must have been immense. I have a better picture now of how it must have looked like here back in the days where these gigantic machines dug deep into the earth and left these enormous craters.

Honestly speaking, I was blown away by the machines and their size. Unfortunately, due to the upcoming event there were no more tours offered on that day. But I think that we’ll certainly come back. This would give us the opportunity to climb on top of these machines and have a look at the re-natured former mine. I can imagine that standing on top of these beasts makes you feel even smaller than just standing next to them.

What we’ll keep in good memory is how the area and the machines were lit up at night. The light design was multi coloured and kept changing frequently. This made the machines look even more humongous and monstrous.