Dresden is home to the Frauenkirche (Chruch of Our Lady). The original name “Unserer Lieben Frauen“ (Our beloved ladies) got shortened over the years to become the term that is used today: Frauenkirche.

A monumental Baroque church can be found on Dresden’s Neumarkt, the Frauenkirche. It was designed by Georg Bähr and completed in 1743. This sacral building has an enormous stone dome. Since the architecture of the church is so rich, we would like to recommend the website of the church for more details.

During the aerial attacks of World War II, the church got completely destroyed. The ruins of the church became a monument and a symbol against war and destruction and remained in the city until 1994. Funds from all over the world helped to rebuild the church between 1994 and 2005. On the 30th of October 2005, the re-erected church was inaugurated with a benediction service and is now regarded as a symbol of reconciliation. 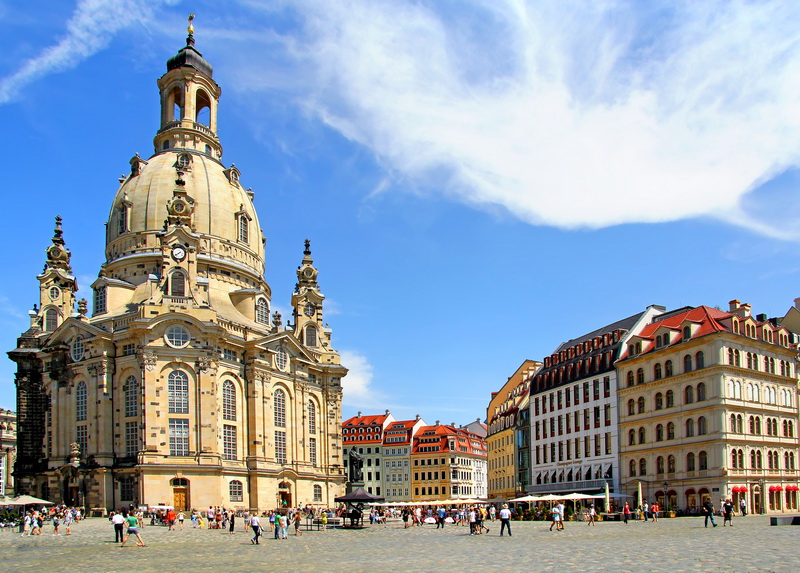 The Frauenkirche can be visited today. Our trips to Dresden have always been rather short so that we never had the chance to see the nave. But we always enjoyed the exterior. Due to the façade being relatively new it still looks clean and bright. This gives the observer an idea of how other buildings might have looked like in the past.