London is the capital of the United Kingdom and is located in England.

Discover London, a truly outstanding city. There is so much to discover here, as a weekend is not enough and you will definitely be back! 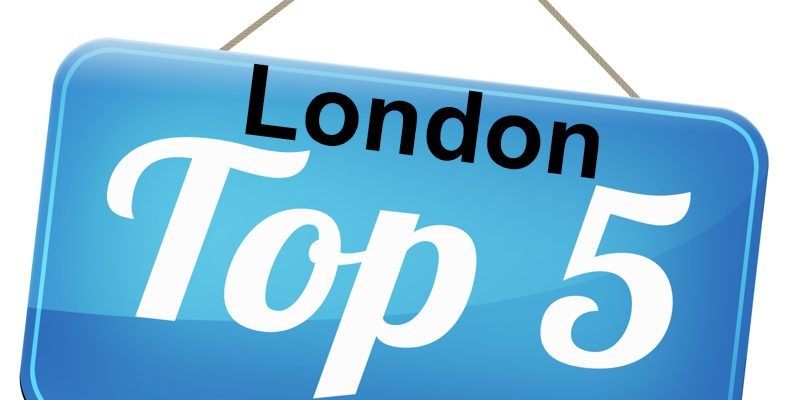 London
Our top 5 places in London

Here is a write up of our top 5 places in London. All of these spots can be easily reached on public transport.
It took me a little while to figure out what my favourite places on our trip to London were. This journey was so diverse, so new, so fascinating, so wonderful – it wasn’t easy to decide. 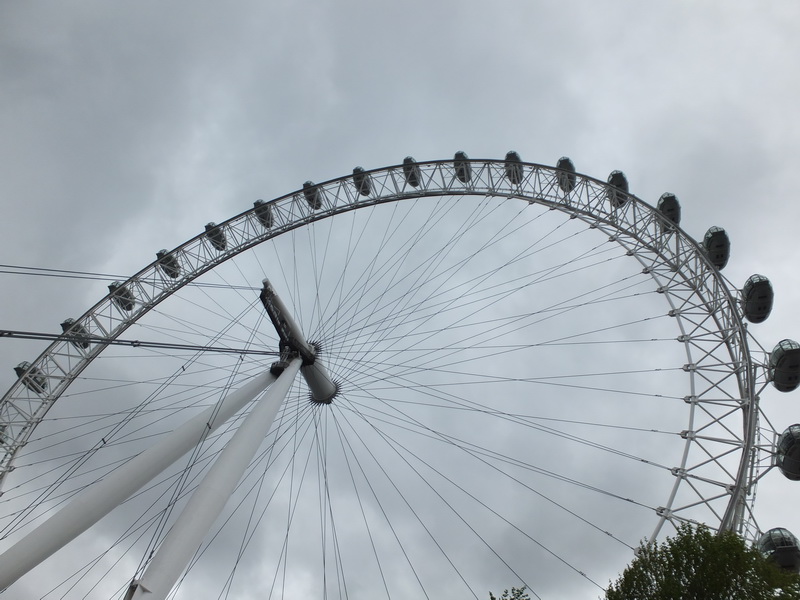 I already decided that I wanted to go on this Ferris wheel before we came to London.

We purchased our tickets online in advance to avoid long waiting times. We didn’t have to queue for long and we also had no other passengers in our car – at 10 in the morning, London is apparently still asleep.

I was enthused! The view was breathtakingly beautiful. Read more about it in our London Eye article…

Everything about the Olympics really fascinates me. Up to now, I tried to find the remains of The Olympic Games at all our travel destinations that had something to do with Olympia.

So the Queen Elizabeth Olympic Park was, of course, one of our destinations in London. It was a long-ish ride on the tube out there but it was worth it. We were able to discover not only the sports facilities but also a lovely park. The deconstruction of the stadium that was happening at that time was really interesting to watch. We got a good look at it from the viewing platform of the Orbit. 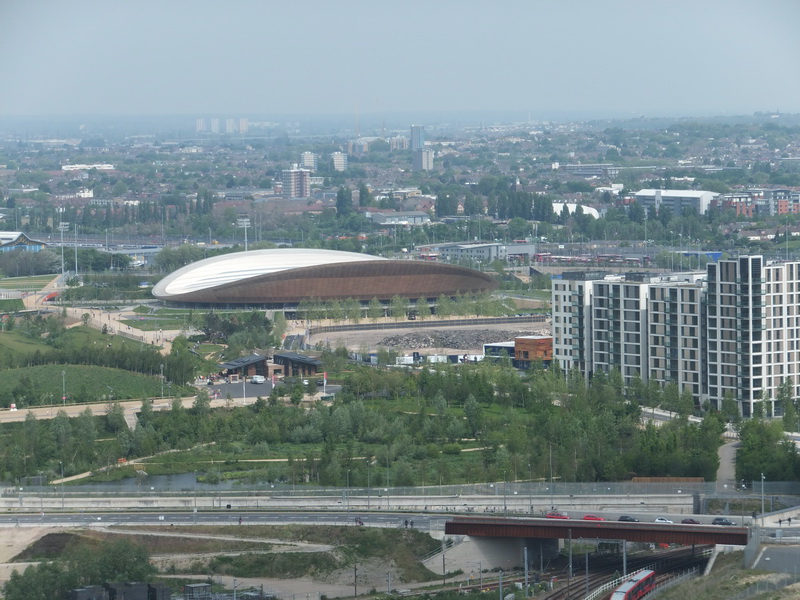 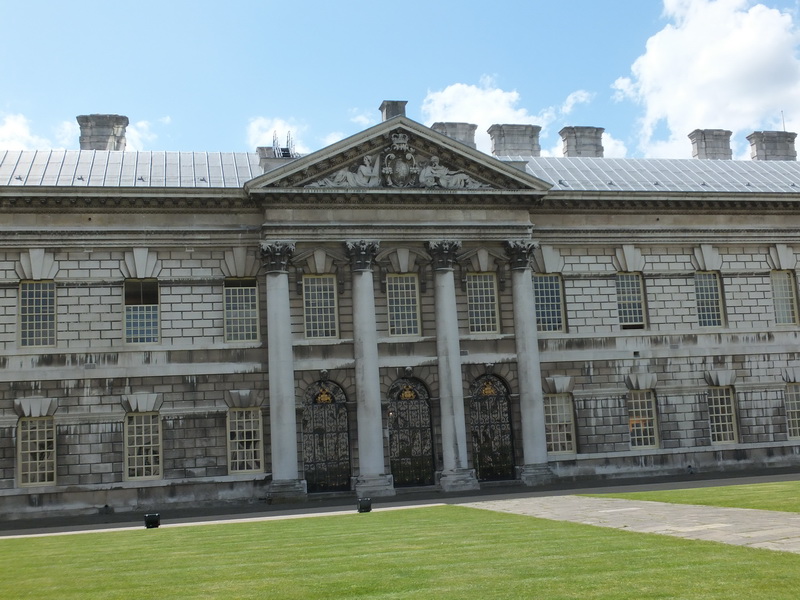 We took a boat to Greenwich. Not only the boat tour on the Thames is an experience, the crew’s commentary along the way was so informative that one should really be given a recorded version to listen back to fully take in all the information. There is so much to discover at the banks of the river that the time on the boat is over way too soon.

Greenwich itself is ideal for little walks. The University campus with its old buildings is not to be missed just as well as the walk up to the observatory and the Prime Meridian that runs through Greenwich.

The Tower of London is one of the main tourist attractions in London. Of course we had to go there! And of course many, many other people wanted to go there, too. We went relatively early in the morning and didn’t have to queue for long.

On our to-do list for the visit (for which we had typically English weather) as well as on everybody else’s were the Crown Jewels. Fortunately, we caught a gap between two large groups and didn’t have to wait in line.

The whole area, the Tower and its history are very fascinating and interesting. 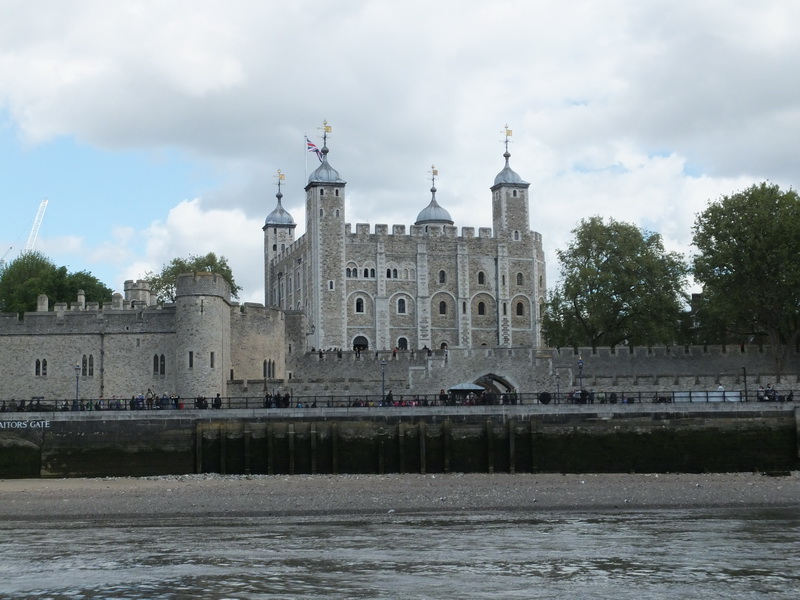 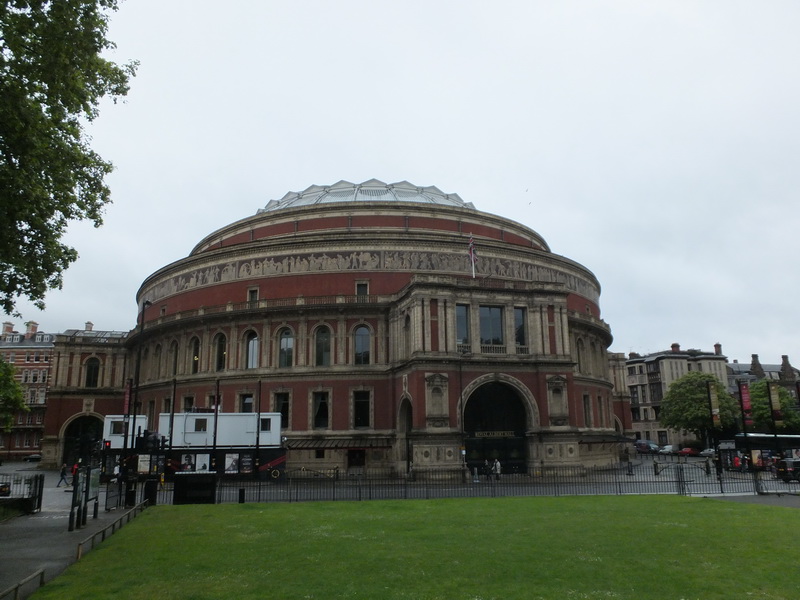 And that was a good call!

The guide shared a lot of information and we got to see a stunning concert hall in which I’d love to see a concert one day. 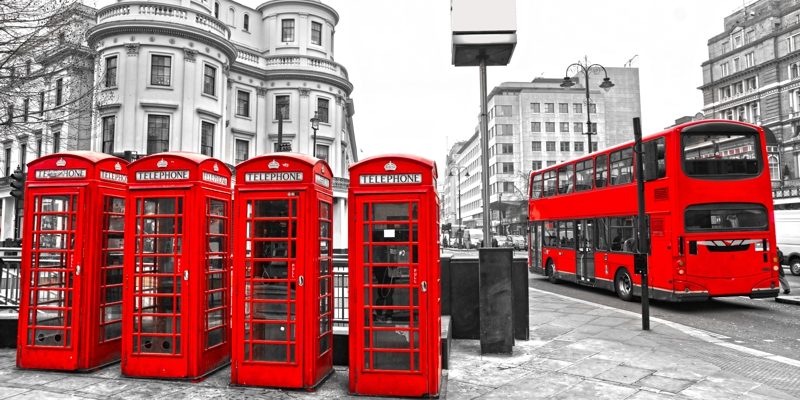 London
A walk through London

Here we go, on our last day in the city, we took another lovely walk to the famous landmarks. We started in light rain but the sun came out later. Oh yes, this oh so very British weather! 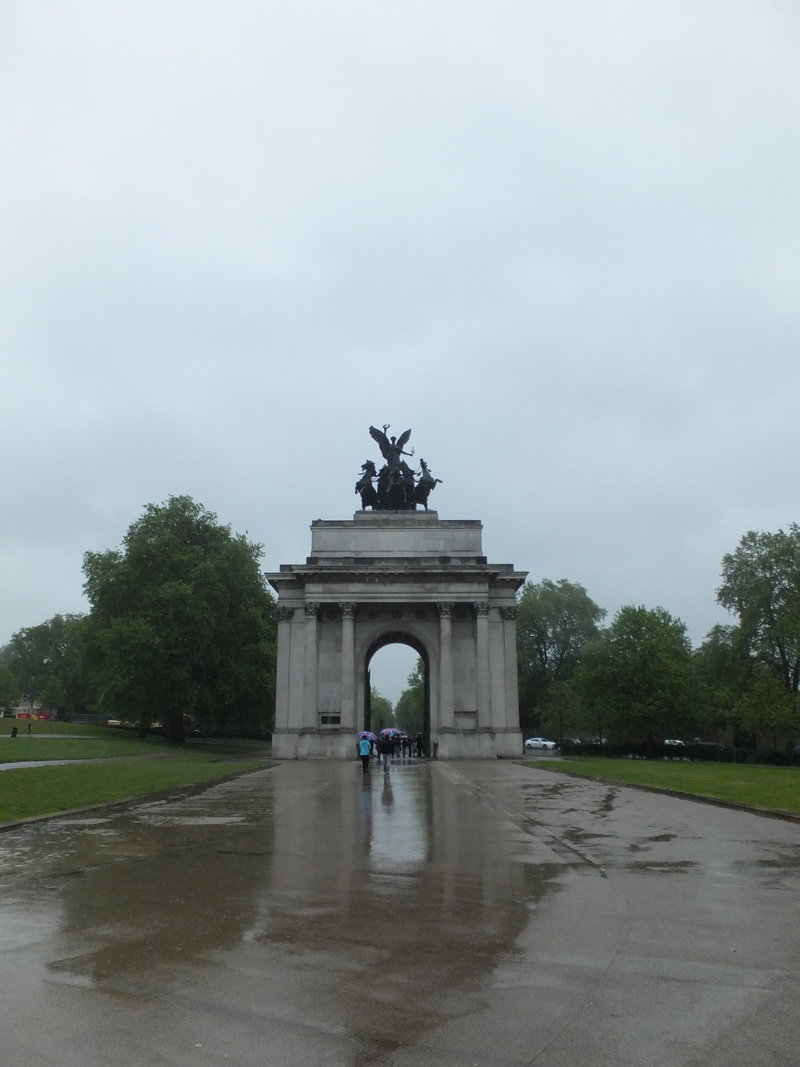 Our first stop was the Wellington Arch. Access to the viewing platform is free with the London Pass. We just wanted to have a quick look.

But when we came into the entrance hall, the lady at the desk quickly welcomed us and immediately urged us up the viewing platform “Quick, quick!”, she said, “The Change of the Guards is about to begin!”.

Looking back, this woman deserves a huge thank you!

The Horseguards make their way to the Change of Guards through the Wellington Arch. We had a fantastic view of the proud men and their horses. But also without the horseguards a visit is well worthwhile. The view is very pleasant and the little museum shows interesting exhibits.

We were a little damp when we decided to take the bus to the Royal Albert Hall, even though it is only a small distance. Participating in one of the tours there is free with the London Pass. A little extra time is needed here. Tours start every 30 minutes and have only a limited amount of spaces. Depending on how busy it is it can take a little while until a spot becomes available. There is a little café and bistro in which we had about 45 minutes time to dry a little before our tour.

The tour is offered in English, but is fairly easy to understand for foreigners. We visited the concert hall and also the small and surprisingly plain room in which the Queen spends the time during the intervals. Stories about different artists, the history of the Royal Albert Hall and the architecture made the tour interesting and entertaining. 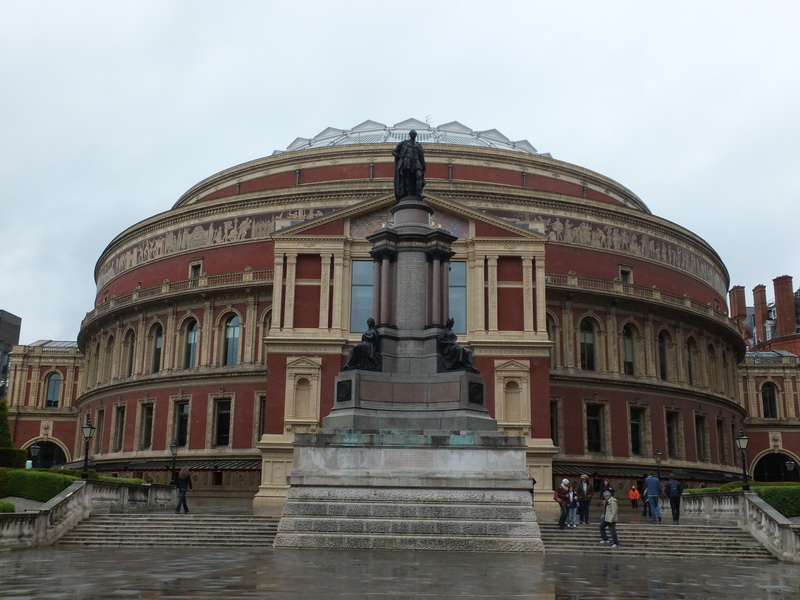 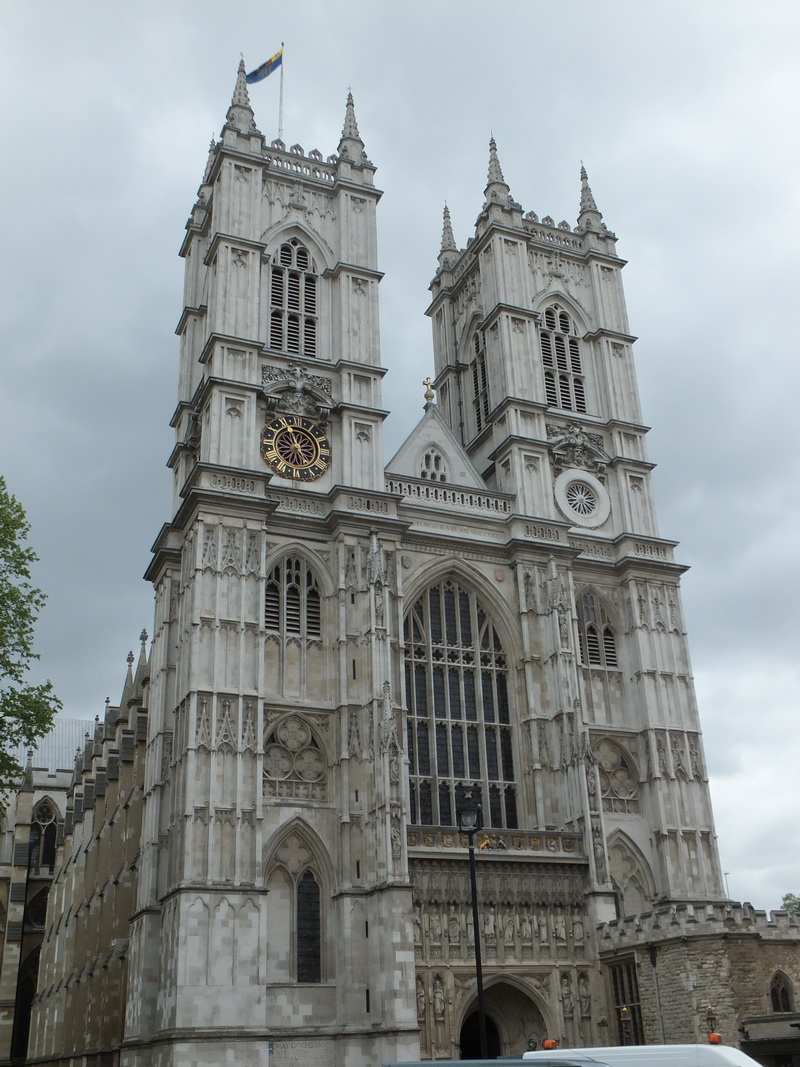 Opposite the Royal Albert Hall in the park, you find the Kensington Palace. Since the rain had stopped, we walked past it through Hyde Park.  On the other side of the park, we hopped on a bus again and went to Westminster Abbey. This visit, too, was free with the London Pass. On top of that, you get to queue in the so-called SpeedLande, which means considerably shorter waiting times. Thorough security checks are carried out before entering the church, taking pictures of the interior is prohibited. But the visit is well worthwhile, a superb nave.
The last stop of our city tour was Trafalgar Square. A massive, insanely busy square in front of the National Gallery. But the pretty fountains also made this quick side trip an experience. 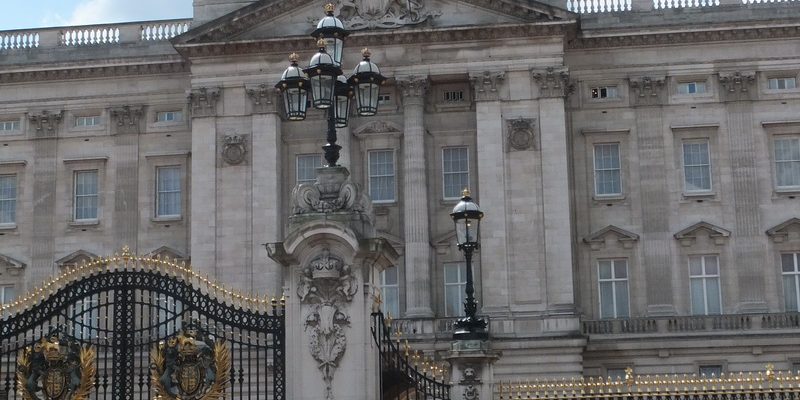 Buckingham Palace is the residence of the British Royal Family in London. It is not only purely residential, it is also used for official state occasions. For many tourists it is a highlight of their trip to London.

Since 1990 parts of the official premises are open to the public. Initially, this was to make some money for repairing Windsor Castle after a disastrous fire. But even today, every year in August and September, the Westwing of the Palace can be visited. 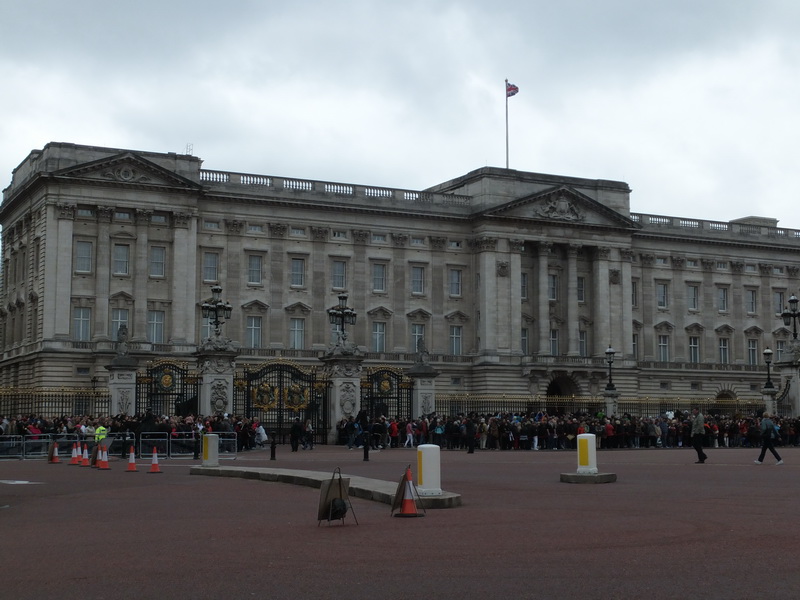 The Royal Family does not own the Palace. It is the property of the British State. Between April and July, daily at 11.30 the Change of Guards takes place. This takes about 45 minutes. 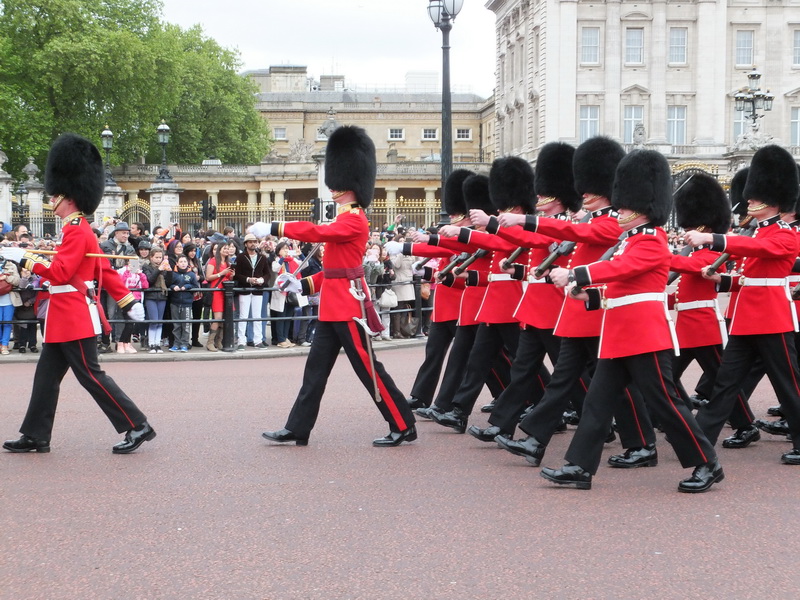 We came a little unprepared, which rarely ever happens with us. On our way to Buckingham Palace, we were surprised about the masses of people that were swarming towards it. We managed to get a good spot near the street leading up to the Palace and observed the Change of Guards from there. A true spectacle to see the Guards marching up and down to the music. This is an event not to be missed.

This little video clip happened spontaneously and only shows a short first impression of the scene. 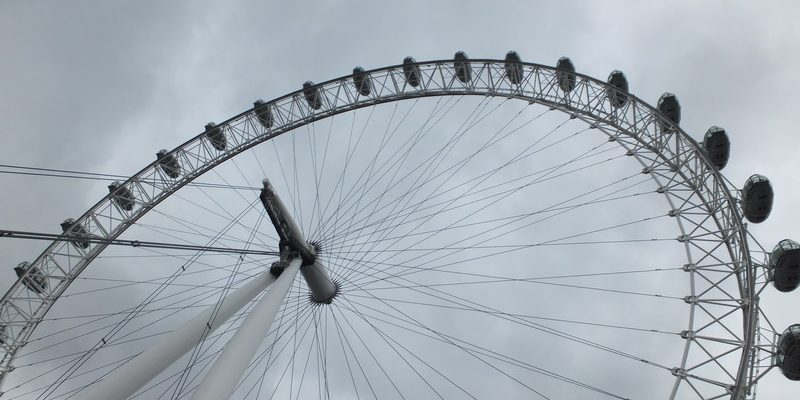 London
London Eye – a ride on the Ferris wheel

The London Eye is an enormous Ferris wheel on the southern embankment of the river Thames, near Westminster Bridge. It is also known as Millennium Wheel.

The London Eye is 135 meters high and was opened in 2000. It has 32 fully transparent passenger cars, each capable of holding up to 25 people. The cars are fixed to the outer rim of the wheel, which allows for a fantastic view. The wheel moves very slowly. It takes around 30 minutes for one full turn. 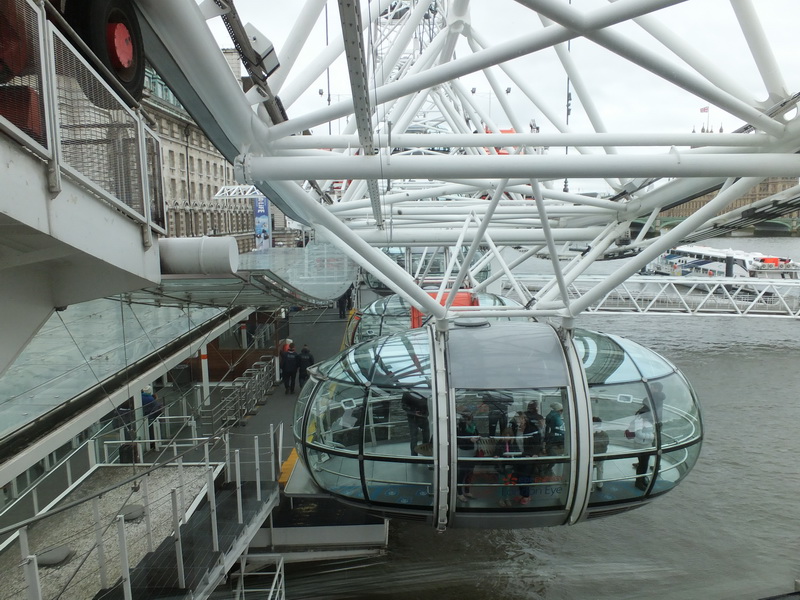 We booked our tickets online in advance. It is always busy around the London Eye. The online ticket states a time slot for the ride and ticket holders queue separately. This lane moves a lot quicker. A good tip is to arrive shortly after the Ferris wheel opens, it is much quieter then. 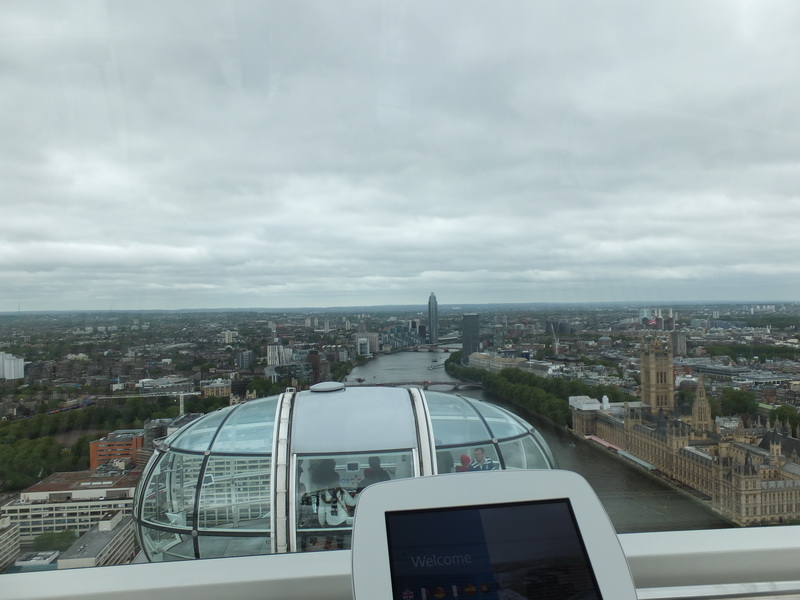 The passenger cars are spacious. Even if they are filled to their maximum capacity every guest still gets a good view. And the view is indeed worthwhile. We ended up having typically British weather, grey with the occasional shower. But on nicer days you can apparently see Windsor Castle. 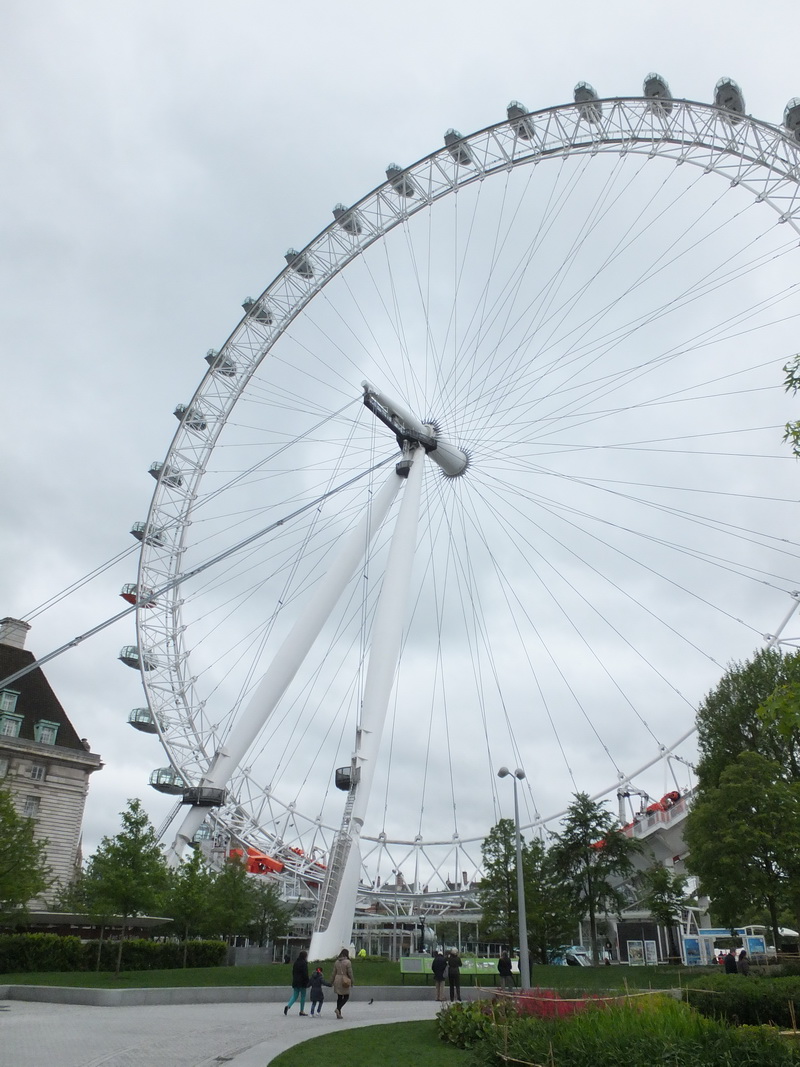 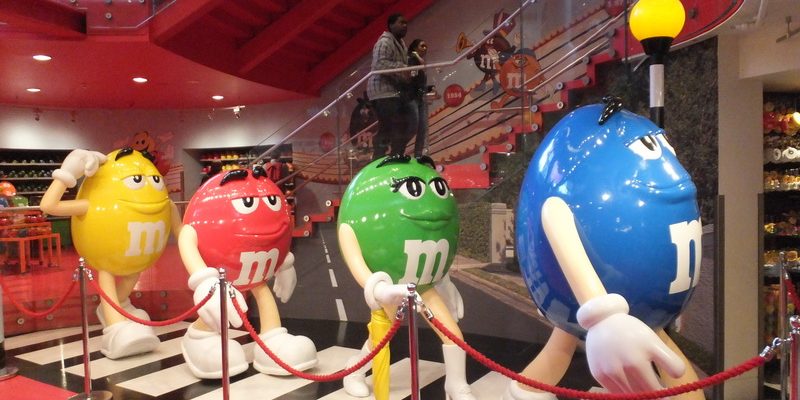 London
Paradise for chocolate lovers – the M&M Store in London

All those people who like M&Ms wouldn’t want to miss it – the M&M Store London! But also those who aren’t fans of the little chocolate balls shouldn’t give it a miss but rather come to the store and have a look at what’s going on.

It is right in the centre of the city, the M&M Store London, and it doesn’t only make kid’s hearts skip a beat.

We didn’t want to miss this shopping attraction and so we jumped in head first into this busy shop. On three floors it offers t-shirts, mugs, hats, … everything one can fit an M&M logo on. Almost every item was turned into M&M merch. And regardless whether they need it or not, people buy M&M dispensers, mousepads, cell phone covers, bedsheets… consumerism-madness is king in this shop. 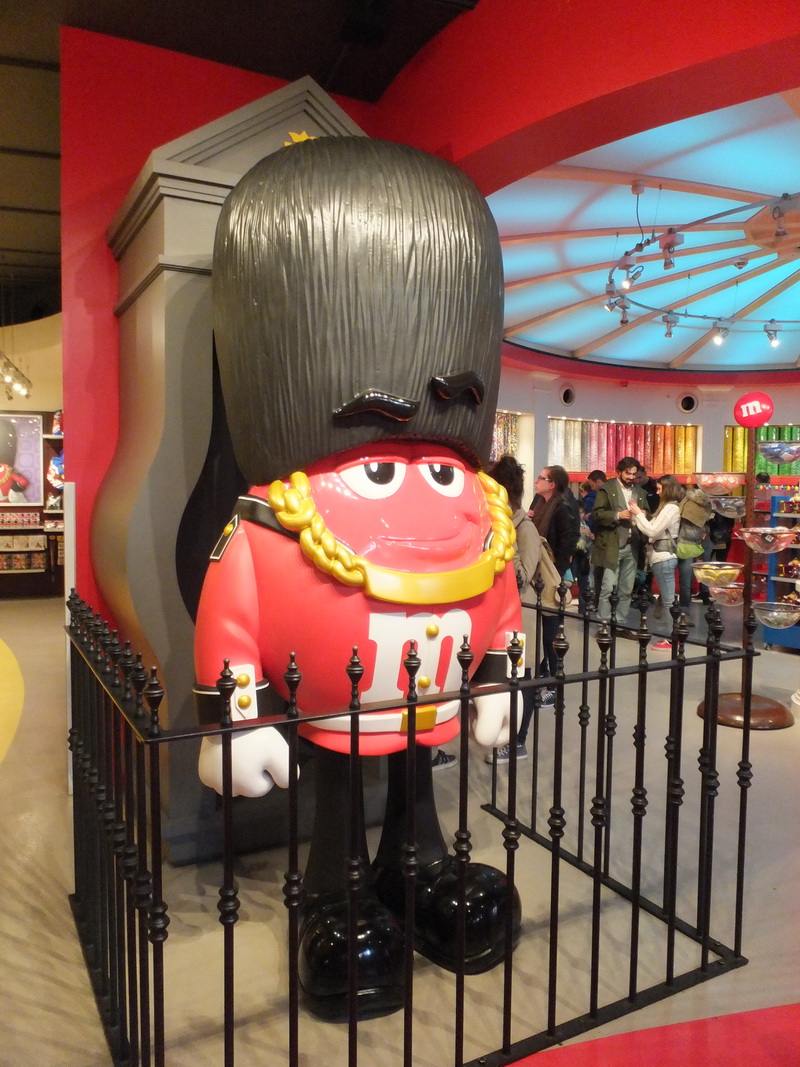 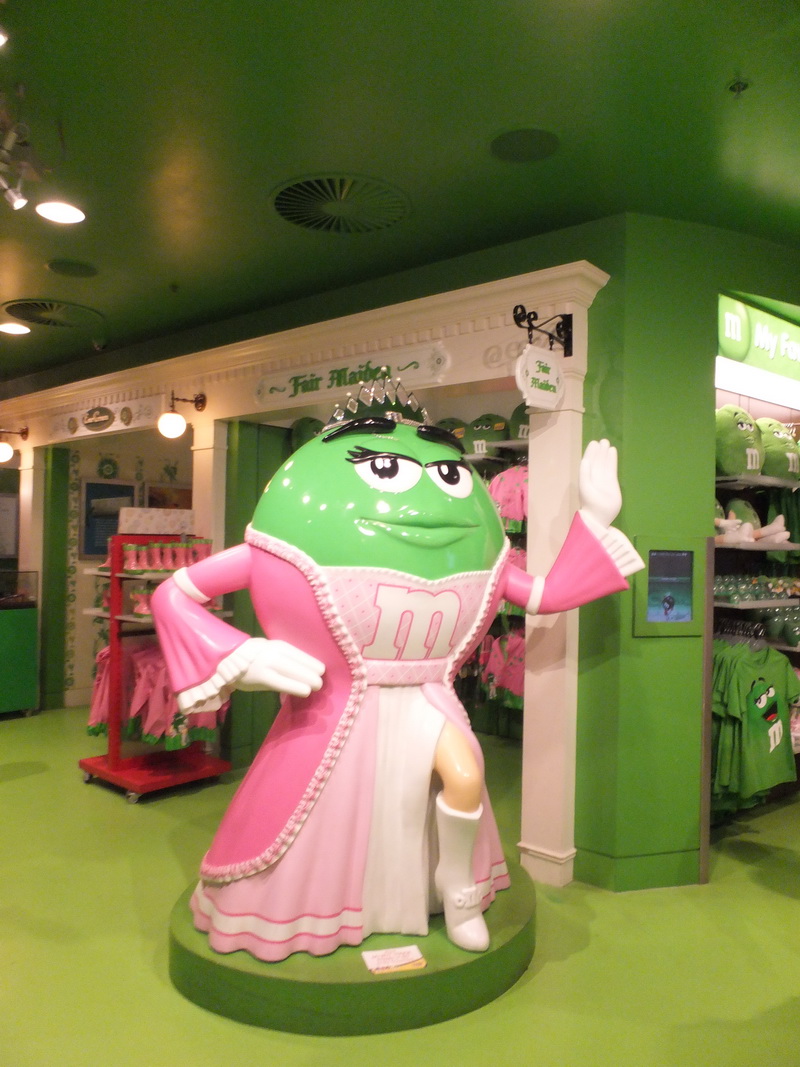 But also those who are here for the chocolate will not be disappointed. M&Ms can be personalised in the shop. Individual greetings and designs can be put together on a computer for you to buy then and there.
My personal favourite was the M&M filling station. Giant, clear plastic pipes hold the sweets for you to take away, colour coordinated of course. No matter what kind of chocolate ball it is, everything has the same price and can be packed into little plastic bags. The price is a little higher than it would be in supermarkets, but no one really seems to care – everyone is filling their bags with excitement. 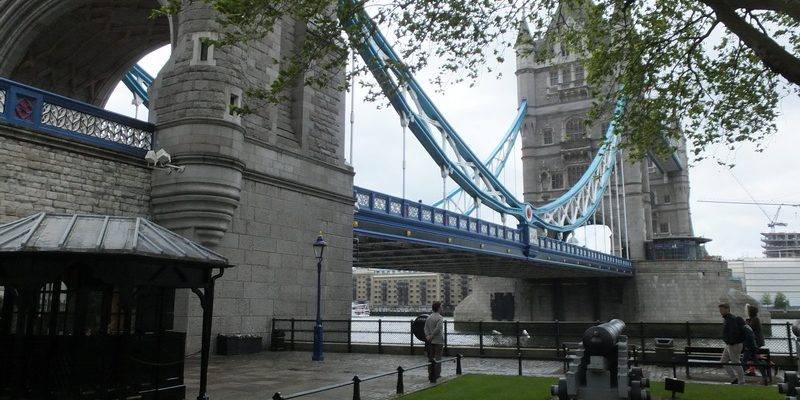 London
Tower Bridge, the most famous bridge across the Thames

The Tower Bridge is one of the bridges that cross the river Thames in London. It got its name from the Tower of London, which is in close proximity to the bridge.

The Tower Bridge used to be the only bridge crossing the Thames in London. Only after the city increased in size, the construction of additional bridges became necessary. 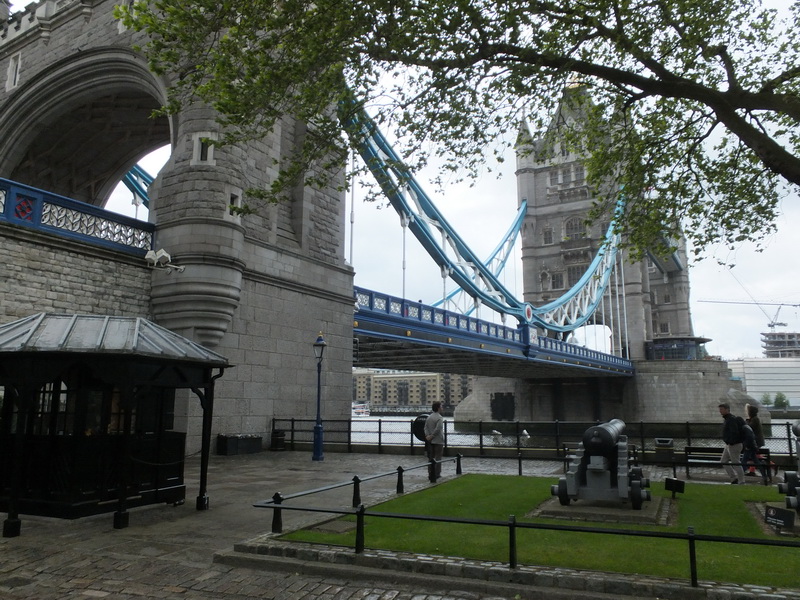 The construction of the Tower Bridge was supposed to last for 8 years and the primary goal was not to obstruct ship traffic on the Thames.
Two pillars were driven into the riverbed of the Thames to support the construction. Over 11000 tons of steel were used to build the framework for the towers of the pedestrian bridge. In order to keep the Thames open for big ships, massive engines were built into the bridge to be able to open the bascule bridge within only one minute. 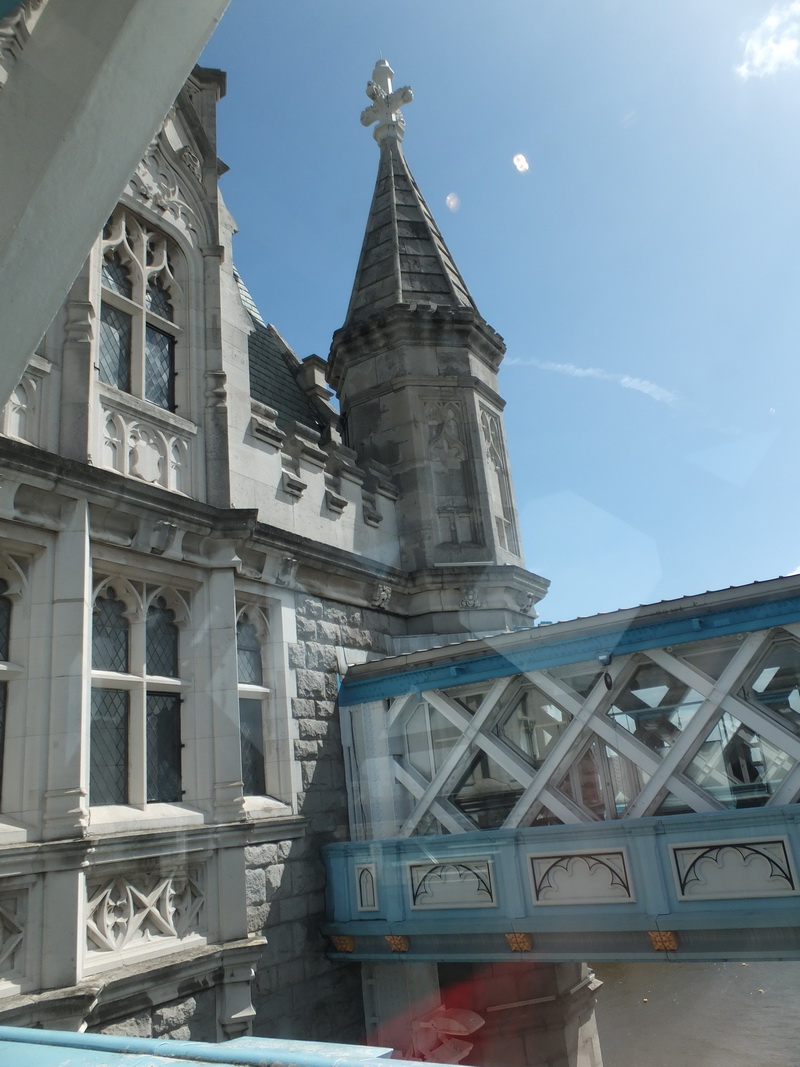 A truly fascinating bridge. We took the time for a visit to the engine room with the fly-wheels and turbines that are used to open the bridge. We were deeply impressed. Also, the view from the pedestrian bridge high above the river Thames is very pleasant.
I highly recommend visiting the exhibition. Admission was free with the London Pass in 2013.

Opening hours for the exhibition: 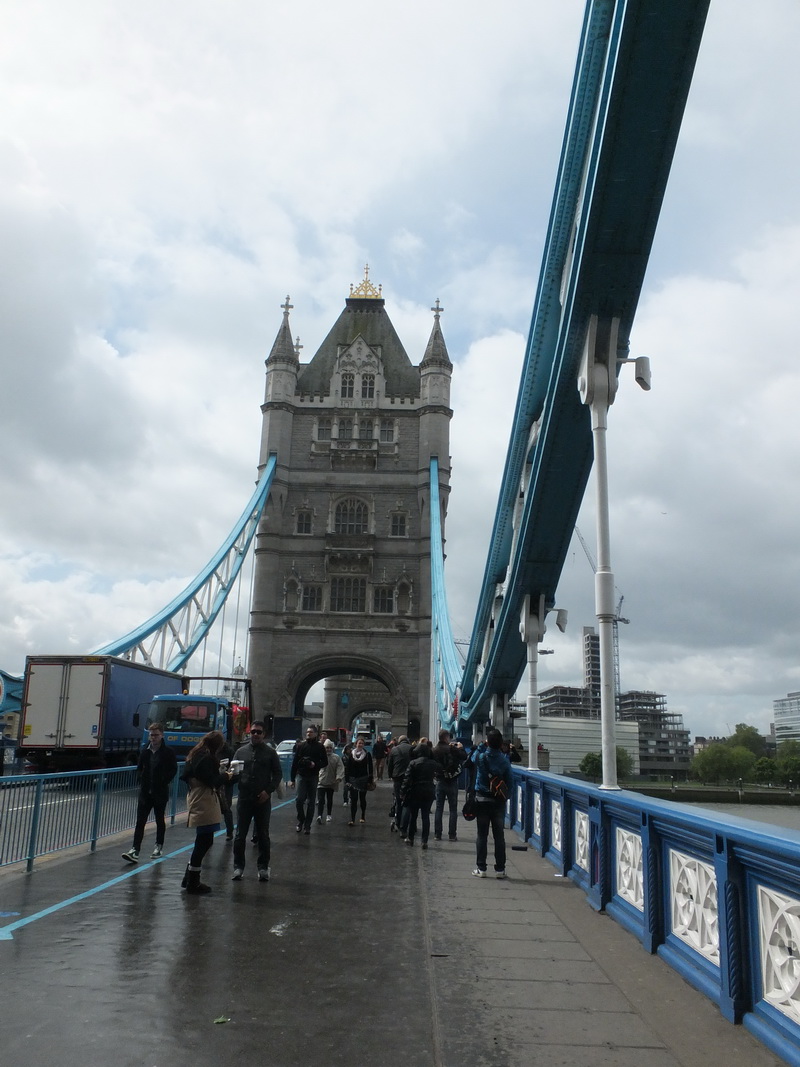